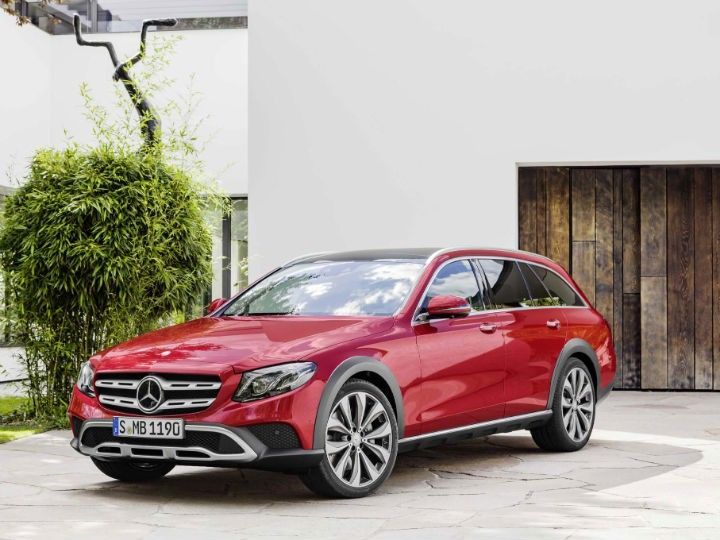 Several automakers have released teaser images of cars that they wish to officially debut at the upcoming Paris Motor Show. With Audi teasing the world with its second-gen Q5 recently, Mercedes-Benz has now unveiled the E-Class All-Terrain ahead of its official debut at the 2016 Paris Motor Show. The hunkered-up estate from Mercedes will poke into the Volvo V90 Cross Country territory. While Audi has the A4 Allroad, built with the same design philosophy, it isn’t in the same league as the Volvo or the Mercedes.

Just like the upcoming Swedish offering, built on the roots of an in-house estate car, the E-Class All-Terrian is a rugged version of the E-Class station wagon. That means it is equipped to tackle light off-road driving without creating a ruckus. As far as the exteriors are concerned, the All-Terrain comes padded with hardened plastic cladding all around the car. While the standard air suspension keeps its place, customers will have a choice from three 19 or 20-inch wheel designs. The tyres offered will have higher sidewalls to withstand rough terrains. The setup will help the All-Terrain ride 1.1 inches higher from the ground, compared to the standard E-Class estate. Underneath, the All-Terrain is protected by a skid plate to keep the engine safe from potential hazards.

Under the hood, it will feature a new 2.0-litre turbocharged diesel 4-pot motor, tuned to pump out 194PS of power and a healthy 295Nm of torque. The Germans have mated the engine to a new 9-speed automatic transmission, powering a four-wheel drive system. To up the ante, Mercedes-Benz will offer a stronger six-cylinder diesel mill soon after the official launch.

As seen on the GLE SUV, the toughened station wagon will feature an All-Terrain driving mode along with the usual Eco, Comfort and Sport modes. Selecting the All-Terrain mode raises the ride height by 0.8 inches and tweaks the stability control, the transmission and the traction control accordingly.

No price list has surfaced yet. To start with, Mercedes-Benz is expected to launch this car in its main European markets like the U.K. and Germany in 2017.