Yes, the German luxury car brand has produced over 1 lakh cars in India 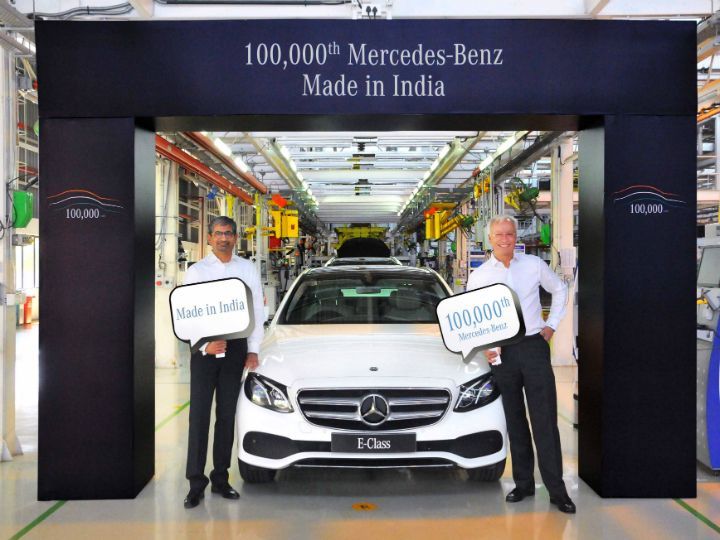 German luxury car marque Mercedes-Benz crossed the cumulative production of one lakh cars in India today. The 100,000th car is an E-Class E220d LWB model, which rolled off the carmaker’s Chakan facility near Pune. The company, which started its India innings 24 years ago, is confident that it can reach the next production milestone sooner. It also said that the roll out of the 100,000th car is a testament to the strong customer trust it enjoys in the country.

Currently, Mercedes-Benz has a total of 17 cars that are priced between Rs 30 lakh and Rs 10.50 crore. These include popular sedans such as the C-Class and E-Class, SUVs like the GLA and GLS and supercars and convertibles, including the AMG GT-R and S-Class Cabriolet. In fact, it is the only carmaker to rival a behemoth like Maruti Suzuki when it comes to the number of models on sale at any given point of time. Having started its Indian operations at Pimpri, Pune with the production of the iconic W124 E-Class, the German carmaker now assembles all of its cars at its Chakan facility, which is spread over an area of 100 acres and developed with an investment of over Rs 1,000 crore.

For more details, check out the press release below:

Mercedes-Benz reaches another milestone in India; rolls out its 100,000th car in India

Speaking on this historic occasion, Roland Folger said, “The roll out of the 100,000th Mercedes-Benz vehicle in India is a strong testimony of the impeccable customer trust and the unsurpassable brand equity Mercedes-Benz enjoys in this dynamic country. The journey that began 24 years ago, as we pioneered the luxury car segment in the country, has only gotten more fruitful and today we remain the most preferred luxury brand in the country. The milestone of rolling-out 100,000 cars is also the result of the absolute dedication of all past and present employees of Mercedes-Benz India, who remain our best brand ambassadors. This achievement also reiterates Mercedes-Benz’s India commitment and we strongly believe in the India story and it’s potential. We will further deepen our strong connect with the Indian customers and keep continuing to fascinate them with our products and customer service.”

Mr. Folger further added, “With the growing demand of Mercedes-Benz products, a spiraling aspiration among young successful Indians, our extensive and expanding local portfolio, combined with an unparalleled network and innovations in customer service; we are positive that the next production milestone will be attained even earlier. We pioneered luxury motoring in India and with our ‘customer delight’ approach and vision for future, we are confident of defining future mobility in India as well.”

Piyush Arora, Executive Director, Operations, Mercedes-Benz India commented, “Mercedes-Benz India’s production facility is a global benchmark in quality and technological advancement in manufacturing, and it has remained the backbone of our growth narrative in India. A very high level of refinement and implementation of advanced technology and flexible processes ensures Mercedes-Benz’s production quality conforms to the most stringent global standards, and creates new benchmark in manufacturing for the luxury car industry in India. With the roll-out of the 100,000th car, we reiterate our ‘Make in India, for India’ commitment and will continue our local value addition and make the best of global products available for our discerning customers in India. We are well positioned to meet any future demand in production and adopt future technologies as per market requirements.”

With a heritage that goes back over 130 years and an illustrious history in India, Mercedes-Benz has inextricably been a part of the country’s automotive landscape.