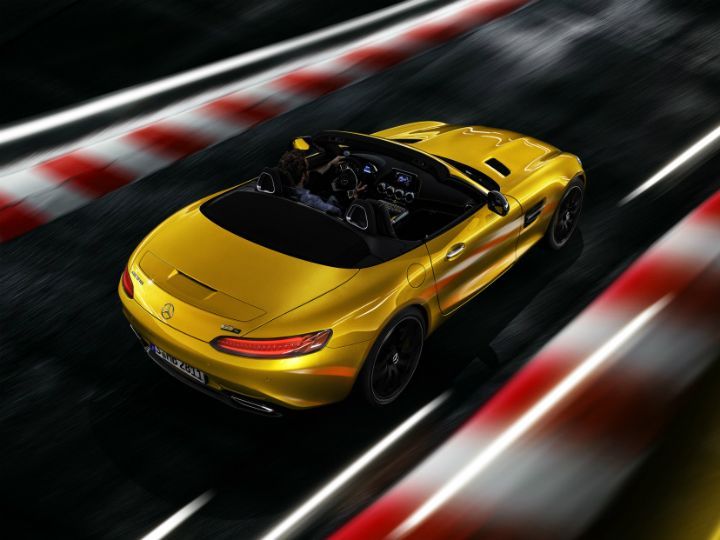 Mercedes-AMG recently unveiled the third variant of its drop-top supercar, the GT. Called the GT S Roadster, the new convertible sits in between the GT and GT C Roadster in terms of price and performance.

Like the rest of the AMG GT range, the GT S Roadster features the same 4.0-litre twin-turbocharged V8 petrol engine mated to a 7-speed dual-clutch transmission. This motor can also be found under the bonnet of the recently launched E 63 S. Check out our first impressions of the performance sedan here. On the GT S Roadster, this motor produces 522PS of power as compared to 475PS on the GT and 556PS on the GT C. At 670Nm, even the peak torque figure sits in between the other variants’ - 10Nm less than the GTC and 40Nm more than the standard GT. The GT S clocks the 0-100kmph sprint in just 3.8 seconds, which is only 0.1 second shy of the range topper, and is capable of hitting a top speed of 307kmph.

Unlike the standard GT, the GT S Roadster is equipped with an electronically-controlled limited slip differential and adaptive damping too. It rides on 19-inch front wheels and 20-inch rear wheels. Customers have the option of upgrading to the AMG Dynamic Plus package as well. This gets them stiffer suspension, a re-tuned steering setup and active engine and transmission mounts. The pack even adds Nappa leather and DINAMICA upholstery on the inside.

Mercedes-AMG is expected to reveal the prices of the new convertible supercar in July. We expect it to cost the equivalent of Rs 1.2 crore in the UK. When launched, the GT S Roadster will be a part of 12 models that comprise the GT range. The Affalterbach-based company is expected to discontinue the range in 2020 with the launch of the GT Black Series, which is likely to have a power figure just shy of 650PS!