The Mercedes-AMG GT Black was 1.354 seconds faster than the Lamborghini Aventador SVJ around the Nurburgring 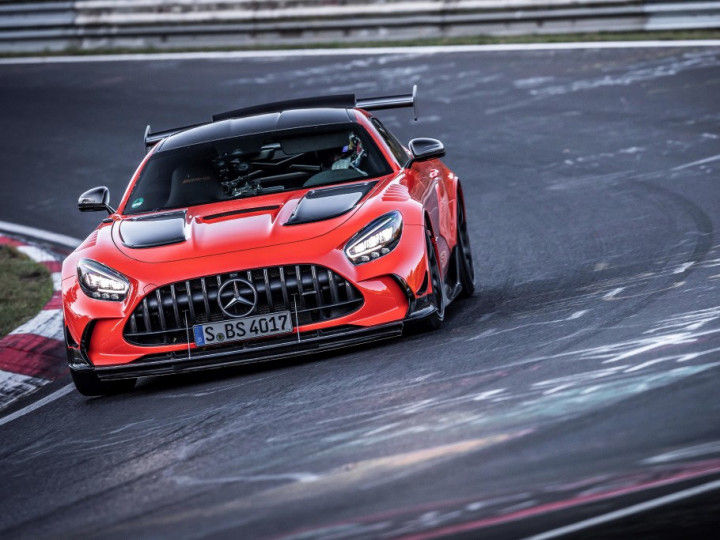 Mercedes-AMG has just smashed the Nurburgring road-legal car lap time record, thanks to the GT Black which achieved a time of 6 minutes and 43.616 seconds. The car was pushed to its limits around the Nordschleife (North Loop) of the iconic German track by GT3 racer Marco Engel. Long story short, the Mercedes-AMG GT Black is the fastest road legal production car that ever set wheels on the iconic German track.

Derived from a lineage of racing, the AMG GT Black is the closest to being a racing car without compromising its road-legal starters. Just look at that carbon-fibre hood with those dual outlets and the rear spoiler. The ultra-low stance and the front with that grille and splitter will have you drooling. It sits on soft compound MICHELIN Pilot Sport Cup 2 R MO tyres.

For setting the fastest time by a road-legal car around the Green Hell, suspension and aerodynamic adjustments were made to the GT Black. The front splitter was extended to the “Race” position and the lower and upper wing blades of the rear spoiler were adjusted to the middle position. The nine-stage traction control system was constantly at six or seven throughout the lap. While there is a lot more, all this technical blabber might put you to sleep. The interesting bit is that all these adjustments can be made by customers too.

The GT Black, powered by Mercedes’ high-performance subsidiary, AMG’s 4.0-litre twin-turbo V8 puts out 730PS and 800Nm. The engine is mated to a 7-speed AMG Speedshift DCT that sends power to the rear wheels. This beast can go from nought to 100 kmph in just 3.2 seconds and has a top speed of 325 kmph.