The three-pointed star will start its assault with the 2020 GLE SUV! 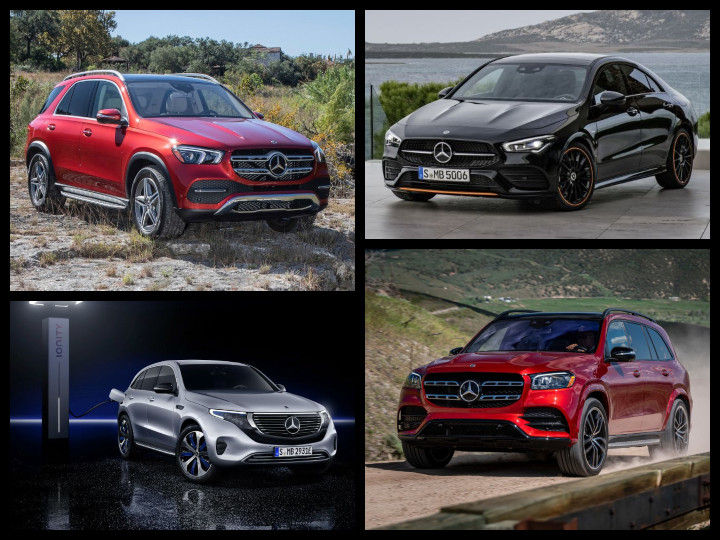 Mercedes-Benz, India’s largest luxury car manufacturer, is set to launch 10 new cars in 2020. That’s more ambitious than Maruti Suzuki, India’s largest carmaker. Mercedes ended 2019 as India’s leading luxury carmaker and looks to repeat the same feat in 2020 as well. So without further ado, here are all the cars from the three-pointed star that are confirmed for 2020.

The 2020 GLE will be Mercedes’ first new car to hit our roads in 2020. It’ll feature a sleeker design, a luxurious cabin and a handful of tech features on-board. That said, the India-spec model won’t feature the brilliant E-Active Body Control System. The 2020 Mercedes GLE will be powered by three BS6 compliant engines: two diesel and one petrol. Interested? For more detials about the 2020 GLE, head here.

The second Mercedes car for 2020 could be the EQC electric SUV. It’s slated to launch in April 2020 and could be priced around Rs 1 crore. The EQC is powered by twin electric motors that develop 408PS and 760Nm. It draws power from an 80kWh battery pack and has an NEDC claimed range of 471km. The battery pack supports fast charging and can juice up from 10-80 percent in 40 minutes. When launched, the EQC would most likely be India’s first luxury EV.

Admit it, the existing Mercedes-Benz CLA is getting a bit too long in the tooth. However, the German carmaker will soon address that by launching the second generation of the compact luxury sedan this year. The new CLA is swoopier than the existing CLA, and its interior design is similar to the 2020 A-Class with a twin-screen dashboard. We expect it to be available with both petrol and diesel engine options. Expect the 2020 CLA to launch in India after April 2020.

Another ageing product in Mercedes-Benz India’s lineup is the GLS flagship SUV. Mercedes will soon refresh it with the brand new GLS. Yes, it doesn’t look as butch as the existing model. However, it gets a modern interior, a tech-laden feature list and is expected to be available with 3.0-litre diesel and petrol engines. Waiting for the S-Class of SUVs? We expect it to launch in India after April 2020.

The recently unveiled 2020 GLA will be headed towards India after April 2020. Just like a typical generation update, it features revamped styling, a tech-laden cabin, and a lengthy feature list. We’re also happy to report that the 2020 GLA looks more like an SUV, unlike the existing model. While the international-spec GLA comes with petrol engines, we expect the India-spec model to feature a diesel motor.

Mercedes-Benz is yet to confirm whether the Maybach GLS will come to India or not. Considering that the Maybach S-Class is doing well in the country, the German manufacturer might launch its SUV sibling in India. The Maybach GLS is the epitome of luxury and first-class experience. In fact, the rear seats can shame private jets and first-class flight cabins. It also has the beans as it’s powered by a 558PS 4.0-litre twin-turbo V8 engine. Interested? For a closer look, head here.

These are just six of the 10 cars that you’ll be able to buy this year. Apart from that, the carmaker is expected to launch a couple of AMG models as well as facelifted versions of its current cars. We will update you with more information as and when we get them. Until then, stay tuned to ZigWheels.