Mega 125cc Scooter Comparison Part 1: The Most Fun Scooter That You Can Get

We are talking 0-60kmph times, braking distances and, of course, lap times 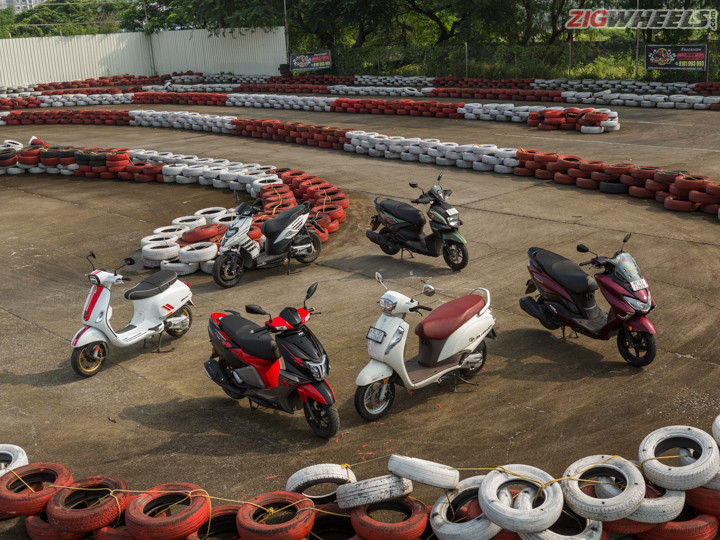 Scooters are no longer perceived as only people movers, purely meant for utilitarian purposes. They are now fun, sporty and stylish. In fact, no other segment is as vibrant as the 125cc space. We even carried out a sensible 125cc scooter test earlier, in which the Suzuki Access 125 emerged as the winner.

But what about the fun ones? What about the likes of the TVS NTorq 125, the Yamaha RayZR 125 and others? Well, we managed to get all of them together and put them through a series of challenges. And for kicks, we’ve also included the Access 125 to see if the Suzuki can still teach the others a thing or two. We have assigned points for each scooter with the winner receiving six and the loser earning just a single point.

Good start for the Access 125, the family scooter from Suzuki being the quickest 125cc scooter that we have tested so far. It is almost 0.8 seconds quicker than its maxi-styled sibling: the Burgman Street 125. The NTorq 125, however, has lost some pace after the BS6 transition. It is almost a second slower than the slower Suzuki scooter, which is quite something. The heft of the Vespa and Aprilia just curb it from zipping off the line.

The table has literally been flipped upside down when it comes to stopping prowess. Both the Vespa 125 Racing Sixties and the Aprilia Storm 125 are brilliant stoppers, with hardly one-third of a metre’s distance between the two’s braking distances. The NTorq’s brakes are equally competent and the RayZR’s lightness helps quite a bit in this regard. Shockingly, the Access 125 is quite a poor braker, not even in the same league as the Burgman.

Here’s the clincher. The large maxi-style scooter beat them all - the racy NTorq, the light RayZR and the quick Access 125. How did it do that?

The Burgman did feel its size around the cramped track. The poor brakes, soft suspension setup and squiggly MRF tyres didn’t help its cause either. But still, the swift acceleration out of slow speed corners was extremely crucial in helping the Burgman emerge as the quickest one here.

Banking on 35+ years of racing pedigree, the TVS NTorq has the best chassis and hardware combination of the lot. You can chuck it into bends and flick it to another side in an instant. It brakes well and the tyres never showed any signs of squirming. It is slow getting off the line and hence, curbs it from setting the quickest time here.

It might be the Racing Sixties edition but no additional boost here for the Vespa. Its great braking prowess helps in braking as late as possible but the lack of drive out of slower bends meant it spooled up quite slowly. Plus, its vague handling was a bit unnerving around the track.

The Access might be the quickest off the line but still out here on the track, it had a lot to deal with. It has the worst brakes in this segment, meaning you had to get off the gas sooner. Plus, its easy handling, soft suspension and not so grippy tyres, meant it was not getting around bends as quickly as it could have.

It is the lightest one here and fairly quick off the line but the shortcomings in the power department of the Yamaha RayZR 125 are exposed here on the track. It was slow getting off from 25kmph and the smaller 10-inch rear wheel didn’t aid in cornering stability.

The #BeARacer Aprilia Storm had a lot riding on its shoulders. The motor feels sprightly for the most part, you can brake as late as possible here, it is very flickable, and the grip from the Vee Rubber tyres is phenomenal. But the chunkiness of the block pattern tyres gives you a very weird steering feel. Sadly, this unnerving feeling translated into a slow lap time.

It is neck and neck between the scooters, especially at the top. But how often do you take a scooter to a track? You have fun with it in the real world where factors such as storage space, features, fuel efficiency and cost play a crucial factor. Part 2 of the mega 125cc scooter comparison will go live on ZigWheels.com tomorrow. Or you can just head here and check out our video on YouTube.