Meet George - The Most Lunatic Rolls-Royce EVER!

If you're a Rolls Royce connoisseur, keep the inhaler and blood pressure pills handy. Also, remember to breathe. 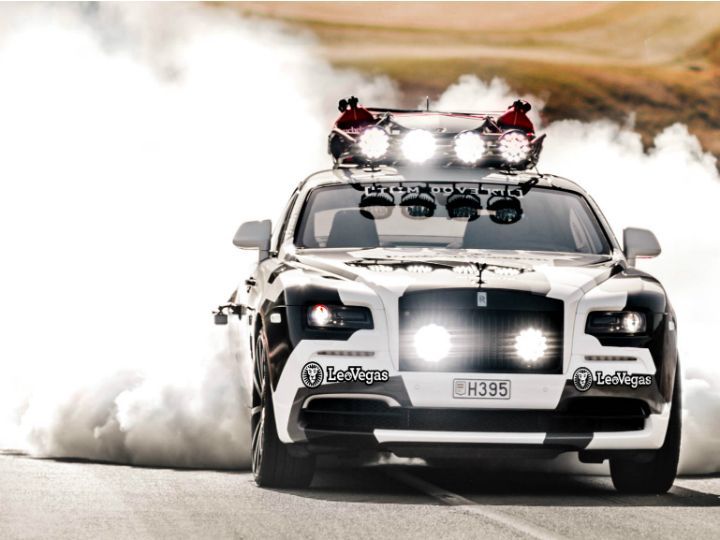 Rolls-Royce. The absolute last word in automotive luxury. When a manufacturer lets you choose between 44,000 colours, you know they take customisation very very seriously. Here's the deal, though. What Rolls-Royce offers in terms of personalisation is fit for the Maharajas, the super elite and the jet-setters. But, what if you wanted to hoon? I'm imagining cutlery being shattered and tea being spat out at the RR HQ. Meet George.

George is a tricked-out Rolls-Royce Wraith, owned by Jon Olsson. Jon's an alpine skier and is well known for owning some seriously cool (and modified) cars. Back to the Roller, it's finished in - what's now become Jon's trademark - a black and white camo wrap. It rides on a massive set of 24-inch alloy wheels made by Forgiato, with custom 'George The Rolls' lettering on the tyres. There are a couple of auxiliary lamps on the grille and four of them on the roof. Because, why not. It's also got a luggage rack on the roof that's held in place by magnets. Again, because, why not.

What's properly astounding is what's been done to the engine. The Wraith's 6.6-litre V12 (which in its stock 624PS/820Nm tune is plenty powerful) has been tuned (by Dutch tuning geeks: Absolute Motors) to produce a whopping 810PS and 1138Nm. All that power to the rear wheels means the Rolls does some really cool burnouts!

Check Out: World's Most Expensive Car - A Rs 83 Crore Rolls-Royce!

Yes, it's a bit over the top and brash. It's the diametric opposite of what a Rolls-Royce Wraith stands for. Honestly, I love it!