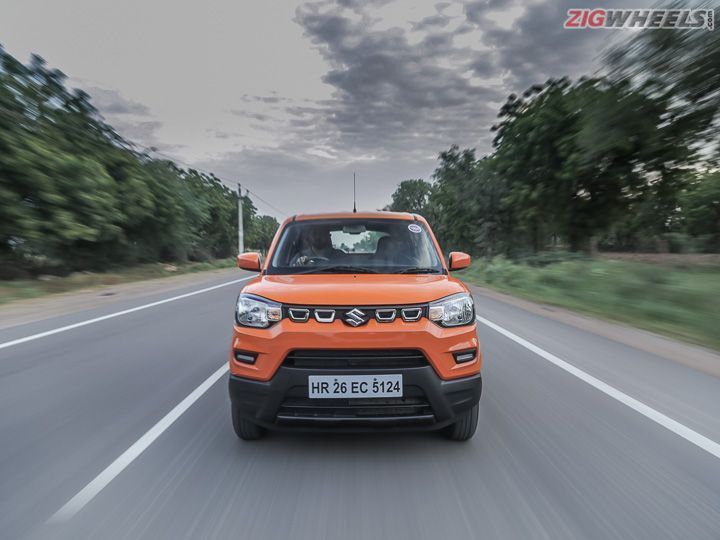 The S-Presso has garnered a lot of attention since its launch in India on September 30. Most of this attention has to do with the odd styling which was a far cry from the alluring promise we saw in the Future-S Concept at the 2018 Auto Expo. Nevertheless, the S-Presso seems to have punched its way out of the shadow of design and identity crisis as it attracted over 10,000 bookings within 11 days of its launch. And although Maruti refers to it as their mini-SUV, we see the S-Presso as a mini cross-hatchback. Here are five interesting things you didn't know about the Renault Kwid rival from Maruti Suzuki:

The S-Presso is available in four variants --  Std, LXi, VXi and VXi +. There is also an optional variant available with the Std, LXI and VXI. The gearbox options on offer include a 5-speed manual and an AMT. The interesting bit here is that Maruti is claiming a better efficiency figure for the VXI and VXI+ (manual and AMT variants) at 21.7kmpl while the Standard and LXI variants (manual only) are rated at 21.4kmpl (both ARAI-certified figures). Ideally, the top-spec VXI and VXI+ variants that come shod with bigger 165/70 R14 tyres as opposed to 145/80 R13 of the standard and LXI should return less fuel economy. But, as you can see, the top-spec variants of the S-Presso, even with the AMT are a teensy bit more efficient than the base variants that comes with a manual gearbox and skinnier rubber.

The Heartect Of The Matter

Underpinning the S-Presso is the same ubiquitous Heartect-K platform. But contrary to the name, the platform doesn't share much with the Wagon R or the Ignis sold here. Instead, the S-Presso’s platform is more related to the Japanese Wagon R Kei-car. But it has been so heavily modified for the Indian market that it shares only the floor panel with the Japanese-spec Wagon R. Maruti claims that the S-Presso’s chassis uses 40 per cent high tensile steel for more strength. Perks of this new platform are a taller stance and a ground clearance of 180mm, even the Kwid bests this with 184mm. As far as overall footprint goes, the S-Presso is taller than its arch nemesis but is narrower and shorter.

The S-Presso comes with a host of optional extras. Those LED DRLs that you see above are a Rs 10,000 optional extra. Maruti is offering two exterior styling packages -- Energetic and Expedition. Both of these get goodies like seat covers, skid plates, claddings, and more. Both packs cost around Rs 26,500 to Rs 27,500. Apart from this, Maruti is also offering alloy wheels, bumper and grille garnish, and not four or five, but 12 seat cover options! The S-Presso is also available with different interior styling kits and a wide range of aftermarket infotainment systems.

Currently, the S-Presso is priced from Rs 3.69 lakh to Rs 4.91 lakh (ex-showroom, India) without the options mentioned above. After adding a fair bit of options, the top-end S-Presso will cost around Rs 6 lakh (on-road). Now, with that kind of money, you can also get the Wagon R in it's fairly well-equipped VXI trim. No brainer as to which you should pick, right? The Kwid in that respect comes off as more affordable, but once Renault introduces BS6 powerplants in the Kwid, its price too will shoot up. And all these facts contribute to the S-Presso’s rapidly increasing popularity amongst entry-level car buyers.