More Options = More Choice = More Confusion. Let’s get confusion out of the equation. 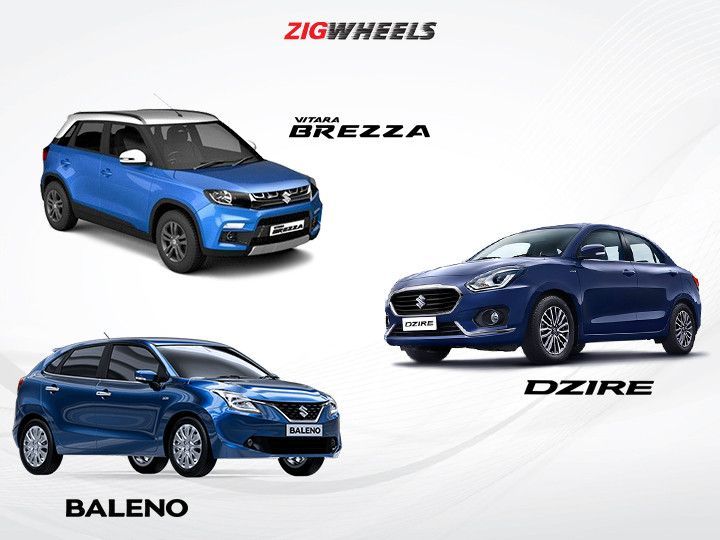 For many car buyers, it's Maruti or bust. As the company expands its portfolio, buyers have more options to choose from under one umbrella. Even if it means having to visit two showrooms. (Ahem, Nexa.)

As the third-generation Dzire goes on sale, we dig deeper into three Maruti cars with overlapping price tags to help you choose your perfect match.

The contestants are all under four meters in length but vastly different in their body styles. There's one sedan, one hatchback and one SUV.

The Brezza's tall body makes it easy to get in and out of, but the seating position is more upright compared to the other cars. Headroom and shoulder room is also excellent in the Brezza owing to its wider and taller body. It also has the best ground clearance of the three cars and by quite a margin. The wider tyres of the Brezza further add to the overall stance.

Since wheelbase contributes significantly to cabin space, the Baleno has an advantage of 20mm over the Brezza. The other two aren't lagging far behind though, and have more than adequate space to seat two six-footers behind each other.

The Dzire has the biggest boot of all to carry more luggage for long hauls or airport trips, but it's the Brezza that has the longest legs for highway cruising, thanks to its 48-litre fuel tank.

In terms of engine and transmission, the Brezza lacks a few things. For starters, it doesn't have a petrol engine, which is a huge turn off for buyers who clock fewer miles. The SUV also doesn't have an automatic transmission to ease city driving. But it makes up for those by being the only car here with the 90PS diesel engine. The other two have the same diesel mill but in a lower state of tune at 75PS. This is where the Dzire diesel AMT scores brownie points for being the only car in this comparo to offer an automatic. Actually, double those brownies for making it available on top trims too.

In the petrol sector, it's a duel between the Dzire and the Baleno, which are both almost equally spec'ed out. On paper, the difference may not look like much, but the Dzire not only makes a unit less of power and torque, it also makes its peak torque 200rpm higher in the rev range. We'll reserve our judgement until we get a chance to take the wheel, but from what we see, the Baleno has a more drivable engine.

Among the petrol automatics, the new Dzire ditches the vintage 4-speed torque converter for a frugal and cost-efficient alternative. The Dzire isn't the first car to pair the 1.2-litre engine with an AMT. It was the Ignis. And, going by how the Ignis drives, it's safe to say that the Dzire AMT is also going to be a smooth city driver. But it still can't match the gearless refinement of a CVT, which is almost as efficient as an AMT. The conclusion? Dzire's AMT may be very smooth, but the Baleno's CVT is smoother.

The Dzire and Baleno share the strong and lightweight HearTECT platform, and that shaves a considerable amount of weight. The Brezza is therefore much farther from the two on the fuel efficiency scale.

Since the three cars are from the same stable and in similar price range, feature overlap is inevitable. First, let's get the common elements out of the way:

Now, let's look into the exclusives starting with their faces. At first glance, all three appear to be sporting projector headlamps, but the sources of light behind the convex lens are unique to all three. The Brezza adopts the oldest technology here with a standard halogen bulb while the Baleno throws white light from its High-Intensity Discharge (HID) lamps. The Dzire trumps them both and uses LED, which is the brightest and the most efficient of them all. The Brezza is also the only car here that doesn't get daytime running lights (DRLs) but is does have LED guide lights to partly make up for that.

While a tilt-adjustable steering is common in all three cars, the Baleno is the only one to get a telescopic wheel. The Brezza, however, gets cruise control for relaxed highway cruising. On the comfort side, the Brezza is the only one to get front as well as rear armrests. Now you know why it has a giant fuel tank.

The Baleno and the Dzire each use a very different approach to keeping the cabin cool. One gets rear AC vents while the other sports UV-cut windows to keep the occupants cool.

As you can see, Maruti Suzuki has taken good care to differentiate each of the three product with adequate feature disparities despite a price overlap. Each can stand its own against the other two, and what that means is that you can't get it all. It'll always be an 'either-or' situation with the three cars.

The Dzire is the only car to offer an automatic in the fully-loaded ZXi+ variant, which makes it an outright winner. However, if you can live with fewer bells and whistles, the Baleno's smoother transmission and city-friendly power output will serve you better.

This is a no brainer. Dzire is the only car here with a diesel engine and an automatic gearbox.

The Baleno has features that the occupants, especially the driver, will appreciate. For the back-benchers, the Dzire will be a better fit.

Look past the Brezza’s steep price tag and you’ll find that it has a punchier diesel engine that’s comfortable in both, city and highway environments. The tall body makes ingress-egress easier, and it offers extra headroom and a better view of the road ahead. The added ground clearance is also something that won't go unused. It's also the only car here that can safely cover 1,000km on the highway before asking for a refill.