New Mahindra XUV500 Spied With A Set Of Funky Headlamps

It’s likely to feature a more evolutionary design rather than revolutionary, but that’s not a bad thing 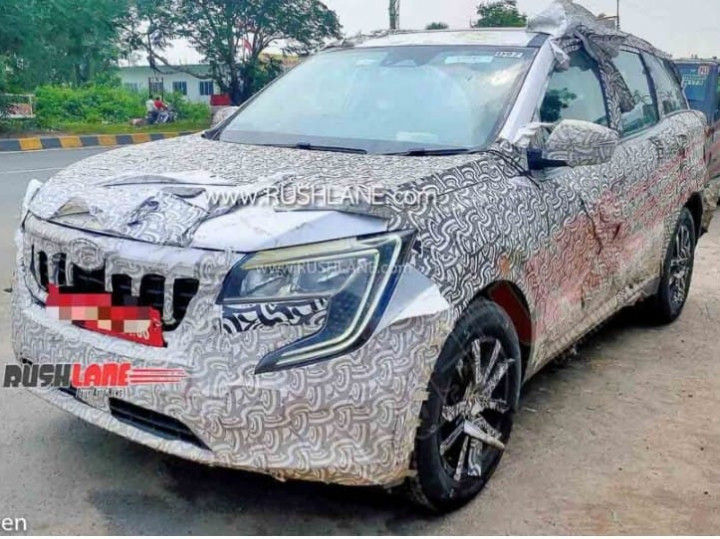 After a gazillion spy shots of the Thar, the next Mahindra that’s under the radar of automotive paparazzi is the upcoming 2021 XUV500. The latest spy shots are of a production-spec test mule with more final design details.

The new headlamps, which have the same shape as the existing model, feature a funky ‘C’ shaped DRL inspired by the XUV300. It starts from the headlamp assembly and extends below to the bumper. The presence of halogen bulbs means this test mule could be a mid-spec variant. Top-spec variants should come with full-LED lighting. Other highlights include Mahindra’s slatted grille and 5-split-spoke alloy wheels.  The rear end features wraparound tail lamps with LED elements.

Inside, the XUV500’s dashboard comes with a twin-screen setup that seems inspired by Mercedes-Benz cars. The infotainment system will also be controlled via a swivel wheel, taking the premium intentions a notch up. It will also feature a dual-tone black-beige dashboard, a first for the XUV. It will continue to be offered with three-row seating.

The XUV500 will be offered with Mahindra’s new generation 2.0-litre petrol and 2.2-litre diesel engines. Both debuted in the new Thar, but they will be more powerful in the XUV and should churn out around 190PS. The XUV may come with manual and automatic transmissions as well as an optional all-wheel drivetrain.

The XUV500 is likely to debut in early-2021 at a starting price of around Rs 14 lakh. It will rekindle its rivalry with the MG Hector/Hector Plus, Hyundai Creta, Kia Seltos, Tata Harrier, and the upcoming Gravitas.