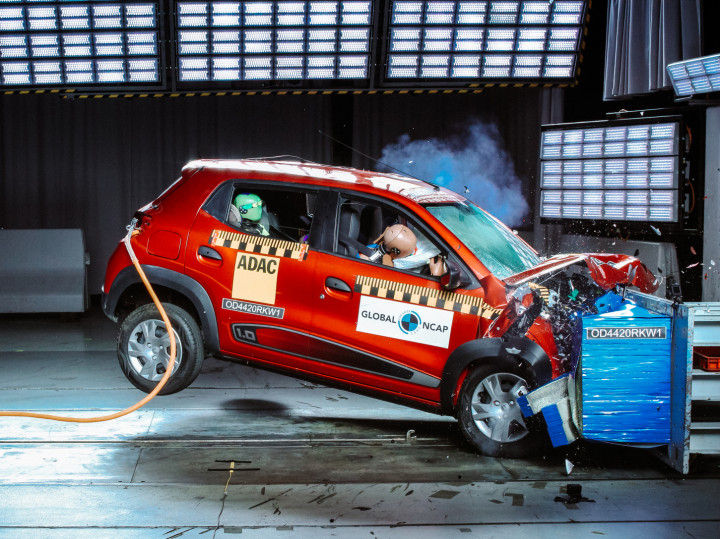 The pre-facelifted Renault Kwid was crash tested by Global NCAP back in 2016 and it scored one star in the safety test. Global NCAP has now put the facelifted version through the paces and it has managed to get two out of five stars. In fact, it has fared better than the S-Presso, its arch-rival, which failed in the safety tests. The Kwid tested here is made in India and sold in South Africa.

The Kwid scored two stars in both Adult Occupant Protection (AOP) and Child Occupant Protection (COP). It was crash tested at 64kmph as per global NCAP standards and the body shell was rated unstable. It wasn’t capable of taking further beatings. However, the report did appreciate the fact that Renault had improved its body structure since its inception.

The Kwid scored 19.68 out of 49 in COP. It couldn’t prevent excessive movement during the impact for the three-year-old child dummy fitted on the forward-facing child seat. Protection was also limited for the child’s head and chest due to structural failure. Even the 18-month-old child dummy, which was fitted on the rearward-facing child seat, had limited protection as its head came in contact with the structure. The report also emphasised the lack of three-point seatbelts for the middle occupant and ISOFIX child seat mounts. However, the South African Kwid gets dual airbags as standard while the model sold in India features a driver’s side airbags as standard. Dual airbags are limited to the top-spec Climber (O) variant here.

While the Kwid has definitely improved in terms of safety over its pre-facelifted model, we hope Renault refines it further to make it a safer car. In fact, the Brazil-spec Kwid with side airbags that was tested by Latin NCAP scored a decent three out of five stars. We hope the India-spec Kwid receives this feature so it becomes a safer and trustworthy option.