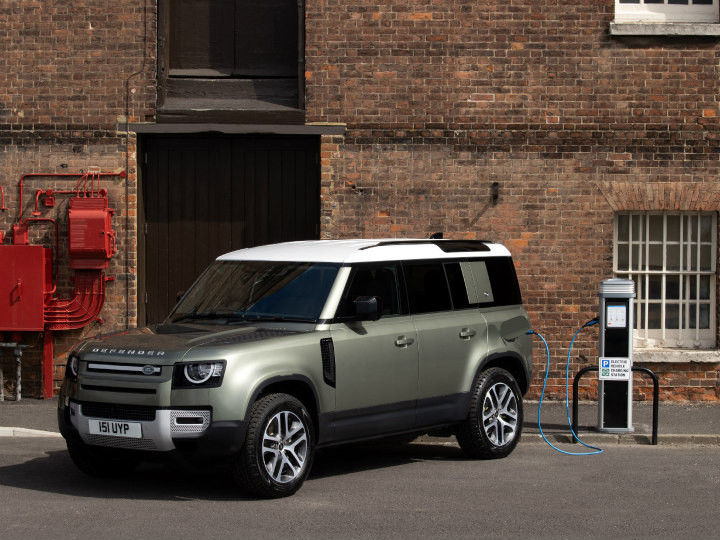 When Land Rover officially took the wraps off the 2020 Defender at the 2019 Frankfurt Motor Show, the carmaker had announced that a plug-in hybrid variant would join the lineup at a later stage. A year later, the PHEV model is finally here but that’s not all. A new six-cylinder Ingenium diesel engine and a new X-Dynamic variant trim have been introduced for the European market.

The new plug-in hybrid model, the P400e, is powered by a 2.0-litre petrol unit and an electric motor juiced up by a 19.2kWh battery. The combined output is 404PS of grunt and 550Nm to make it the most powerful Defender in the lineup. It goes from 0-100kmph in 5.6 seconds and tops out at 209kmph.

Speaking of the hybrid system, its all-electric mode offers a range of up to 43km and gets Mode 3 charging cable as standard with a Mode 2 charging cable as an option. The former gives a 0 to 80 percent charge in 2 hours, while the latter takes around 7 hours for the same, which should be ideal for an overnight home charge. That said, if you’re in a bit of a hurry, a 50kW raid charger does the job in 30 minutes.

Another addition to the Defender lineup is a new X-Dynamic trim which is essentially a cosmetic option for the Defender. You get alloy wheels finished in gloss black as well as blacked-out rocker panels and ‘Silicon Satin’ skid plates. Inside, you get Robustec synthetic seat accents.

Back home, the 2020 Land Rover Defender is priced from Rs 69.99 lakh to Rs 86.27 lakh (ex-showroom). It is currently limited to the  2.0-litre four-cylinder P300 petrol engine, with no word on a diesel engine coming to the lineup anytime soon. Since it is a niche offering, the Land Rover Defender doesn’t have any direct competition as such in India. Its closest rival here is the Jeep Wrangler.