This Raging Bull Has Hit The 10,000 Sales Mark Within Two Years!

While it’s no small achievement, we aren’t really surprised 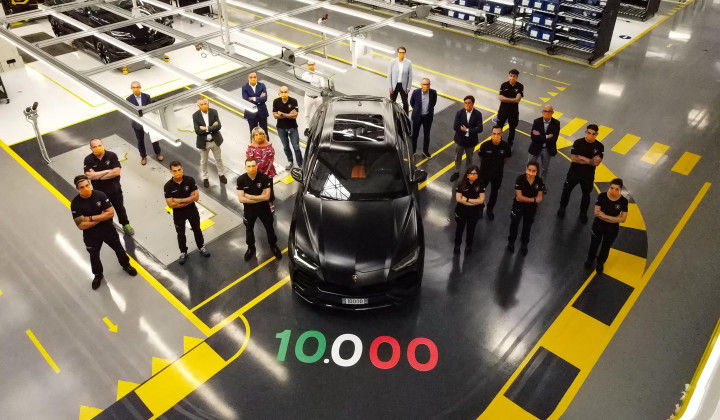 That’s quite quick for a Lambo! The 10,000th Urus just rolled out from Santa Bolognese within two years of its introduction. The landmark vehicle was ordered by a Russian customer and painted in Nero Noctis matte black. We aren’t surprised because Lamborghini has got the Urus so right that there’s hardly anything to fault.

It’s got the looks, it’s got the power to do silly speeds, and it can ferry four people and their luggage. Sounds perfect, right? Sure, it may not be as razor sharp as a handler like the Aventador or the Huracan, but think of it the other way. This Lambo has the capabilities to take you to the wilderness but you have to be extremely careful to not scrape its expensive body parts. And once you hit the tarmac, it’s still a dynamically accomplished car to carve out each of those twisties on your favourite mountain road.

A hit at the rewind button shows the Urus had quite a bumpy start to its journey. Enthusiasts weren’t quite happy that Lamborghini was planning to take the SUV route when it showcased the concept at the 2012 Beijing Auto Show. Moreover, the Urus sharing bits from the Cayenne and Bentayga didn’t go down well with diehard Lamborghini fans.

However, it received a warm welcome when it was introduced in December 2017 thanks to its stealthy looks and the pure exhilaration that comes with owning a Lamborghini. In fact, Lamborghini sold 4,962 units of the Urus globally in its first year itself which is absolutely bonkers for a Rs 3.1 crore (ex-showroom India) SUV!

Yes, the Urus moved away from the Lambo DNA and utilised a 650PS 4.0-litre twin-turbo V8 unit rather than a fully blown naturally aspirated V10 or V12 motor found in its supercar siblings. But this V8 motor, which puts a mighty 650PS and 850Nm, has the chops to take this barge to serious speeds. Naught to 100kmph comes up in just 3.6 seconds, while 200kmph takes an additional 9.2 seconds from there. It maxes out at a mind boggling 305kmph!

In typical Lamborghini fashion, there are six drive modes that alter various parameters. They are the standard Strada, Sport, Corsa and Neve (snow) mode and the optional Terra (off-road) and Ego (individual) mode. So you can set it to Corsa and have fun chucking it around the track or put it in Terra and explore the unexplored!

We aren’t really surprised at the Urus hitting the 10,000 mark so quick, but it’s surely a huge achievement for such a pricey car. Clearly shows that Lamborghini has a winner on its hands. This super SUV takes on the likes of the BMW X5M, Mercedes-AMG GLE 63, Audi RSQ8, Porsche Cayenne Turbo, and the Bentley Bentayga. Incidentally, the last three have the magical DNA of the Urus.