Expected to be unveiled at EICMA this year 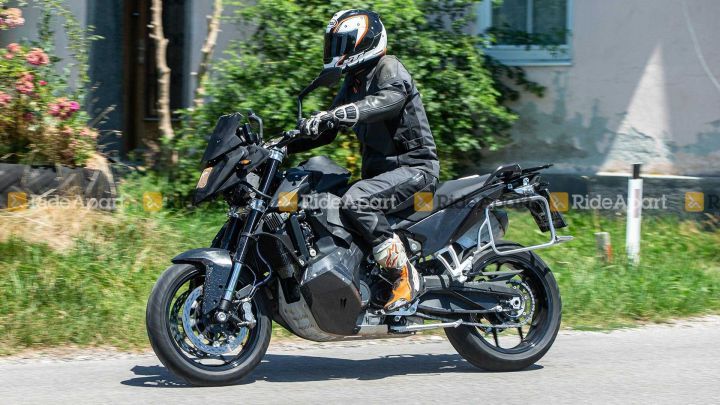 The KTM 890 GT has been spotted testing overseas. While it’s pretty evident that the bike is based on the 790 Duke, its styling is inclined more towards the 790 Adventure. Even the ergos have been revised to suit the bike’s touring temperament.

Also Read: KTM’s 790 Duke Is Just Days Away From Making Its India Debut

The only element that’s reminiscent of the 790 Duke is the top half of the fuel tank. The front LED headlight, on the other hand, harks back to the ADV and sits higher when compared to the 790. It also features wind deflectors along with a small flyscreen which shields its full-colour TFT instrument console. Pan to the mid-section of the test bike and you’d notice an exposed radiator and other electronic equipment which will be covered by tank shrouds on the production model.

Much like the 790 Adventure, the bike comes with large side panels that cover the engine and a sump guard. A single-piece seat which looks like its been picked off the Adventure R replaces the split unit seen on the 790 Duke. The ergos have also been revised so that the rider sits more upright thanks to taller handlebars. The rear quarter panels and the steel trellis subframe have been picked off the 790 Adventure, which means the fuel tank is most likely to be positioned under the seat.

The 890 GT could be powered by a bored-out version of the LC8c parallel-twin engine, which may produce 10-15PS more power compared to the 790 Duke (104PS). The bump in displacement should help negate power loss that’s likely to plague most motorcycles thanks to the stringent Euro5 emission norms.

That aside, the 890 GT comes furnished with an upswept exhaust, mounts for panniers and a top rack. In terms of mechanicals, the bike comes equipped with a long-travel front fork and a rear monoshock sourced from WP. Thanks to its road-biased nature, the 890 runs on alloy wheels rather than spoked wheels. Expect the 890 to feature the same electronic rider aids as the 790 Duke. We could expect the Austrian bikemaker to take the wraps off the 890 GT at EICMA this year.