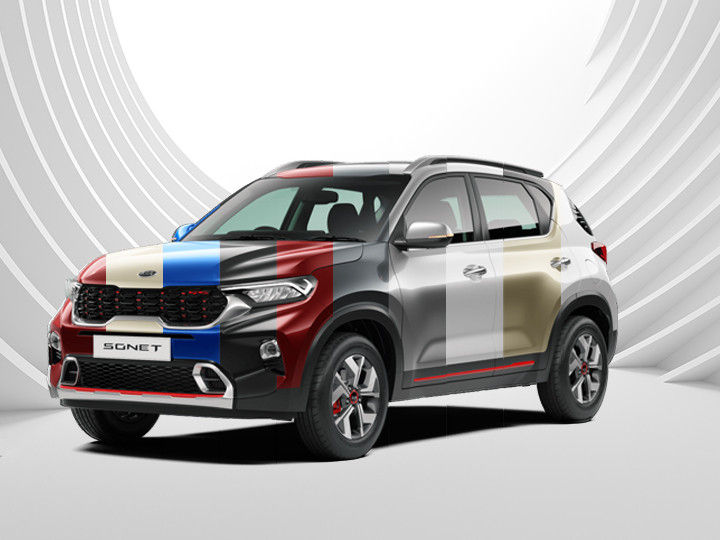 Kia Motors India is set to launch the Sonet on September 18. It will be offered in six variants across two broad trims: Tech Line (HT Line) and GT Line. The Sonet’s HT Line trim comprises the HTE, HTK, HTK+, HTX, HTX+ variants, while the GT Line trim is offered in a sole GTX+ variant.

Now, the Sonet’s variant-wise colour options have been revealed. So if you've been planning on getting one, this report could help you narrow down on a colour.

The first two variants of the Sonet come with limited colour choices, namely: Steel Silver, Gravity Grey, Intense Red and Clear White. If you want any other palette apart from these four, you have no other option but to step up to the next variant.

The HTK+ and HTX variants see the addition of three more options apart from the colours mentioned above. These are Intelligence Blue, Beige Gold and Aurora Black. The white shade between the HTK+ and HTX variant differs. While the former comes in Clear White, it’s replaced by Glacier White Pearl from HTX onwards. The Beige Gold Sonet, which was showcased as a concept at Auto Expo, has made it to production and looks stunning in the flesh.

The GTX+ variant also adds a dash of red on the grille, bumpers, doors as well as the brake callipers.

The Kia Sonet is likely to be priced between Rs 7 lakh and Rs 13 lakh (ex-showroom). It will come loaded with features as well as a wide range of powertrain options. You can have a closer look at the Sonet in our detailed first drive review.