Should you extend your budget and go for a mid-spec variant of the Seltos that promises to offer a more premium experience? 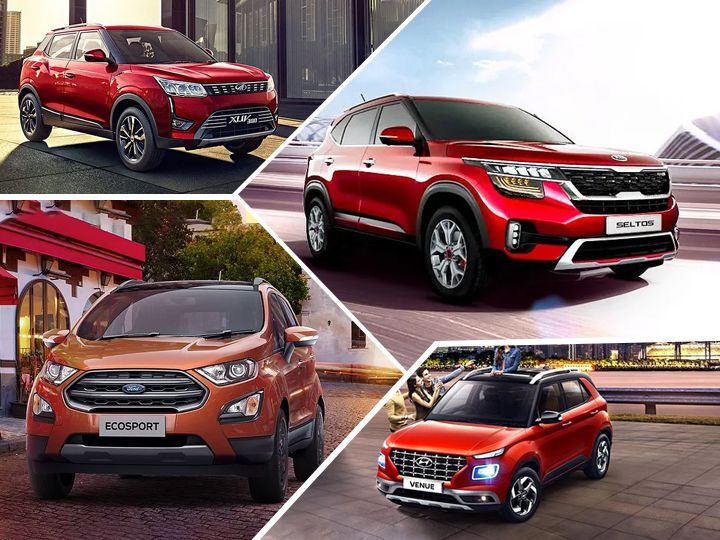 Priced from Rs 9.69 lakh to Rs 15.99 lakh, Kia has positioned the Seltos in the sweet spot between top-spec variants of sub-4 metre SUVs and lower variants of mid-size offerings. The Seltos scores high on the value-for-money quotient as it not only looks premium but also packs plenty of features and a plethora of engine and transmission combinations. Offered in a total of eight variants, certain mid-spec trim levels of the Seltos are priced right in the ballpark of three top-spec sub-4 metre SUVs - the EcoSport, Hyundai Venue and the Mahindra XUV300.

So, if you are wondering whether you should go for a mid-spec Seltos or a top-spec variant of the smaller sub-compact SUVs, then our analysis should help you make a more informed decision.

For this comparison, we decided to pitch the Seltos HTK Plus against the top-spec variants of the three sub-compact SUVs. The reason we’ve chosen the HTK Plus trim for this comparison is due to the fact that it offers the right balance between features and performance. The higher HTX and GT Line variants are slightly on the pricier side and the price gap between the segments are also higher.

Have a look at the table below to see how they fare in terms of prices:

Have a look at the table to see for yourself:

Sure, the HTK Plus trim misses out on automatic climate control, sunroof, rain-sensing wipers, connected-car tech and an auto-dimming IRVM. But these are expected of a mid-spec variant. To cover up the misses though, Kia has packed in Sound Mood Lighting, which alters the ambient lighting based on the music that’s playing from the audio system, and rear sun blinds. Neat!

The Seltos HTK Plus gets the basics covered here with dual airbags, ABS with EBD and rear parking sensors with rearview camera. But it must be mentioned that its top-spec sub-compact rivals offer additional safety features like side and curtain airbags, ISOFIX child seat mounts, electronic stability program and hill start assist. Additionally, all diesel variants of the Seltos come with all-wheel disc brakes just like the XUV300.

The Kia Seltos is the only SUV in this bunch to come with a BS6-compliant engine. Its 1.5-litre naturally-aspirated (NA) engine develops 115PS of power and 144Nm of torque. These figures are not the best considering that it’s the only NA unit in this comparo. In comparison, the Ford EcoSport’s 1.0-litre turbo unit develops a class-leading 125PS of power while the XUV300’s 1.2-litre turbo unit develops a class-leading 200Nm of torque. The Venue’s turbo unit stacks in between but is the most fuel efficient of the lot.

All models come with a 6-speed manual as standard. But if you desire an automatic transmission, the Seltos’ CVT unit can be had in the higher-spec HTX variant while the Venue’ DCT is available in the lower-spec SX Plus variant.

That said, if you want more poke from the Seltos, there’s a 1.4-litre T-GDI unit on offer. This turbocharged unit develops 140PS and 242Nm and can be had with a 6-speed manual or a 7-speed dual clutch transmission (DCT). But the variants equipped with this engine are on the pricier side and fall out of the equation.

On the other hand, the EcoSport and Venue can be had with cheaper naturally-aspirated petrol engines. The EcoSport comes with a 1.5-litre NA petrol engine that develops 123PS and 150Nm that betters the Seltos’ unit by 8PS and 6Nm. The Venue’s 1.2-litre unit develops 83PS and 114Nm and lags behind the competition by a huge margin.

Just like its petrol sibling, the Seltos 1.5-litre diesel is the only BS6-compliant unit here. It develops 115PS of power and 250Nm of torque, which are not the best in this group. In comparison, the XUV300’s unit develops 2PS of power and 50Nm of torque more than Seltos, which qualifies it as the segment leader. The Venue comes with the smallest diesel engine here and produces the least amount of power. But don’t judge a book by its cover as the Venue’s diesel engine produces more torque than the EcoSport.

As expected, the Venue’s 1.4-litre unit is the most fuel efficient of the lot followed by the EcoSport, Seltos and XUV300.

* without roof rails and ORVMs

The Kia Seltos has a clear advantage in this department. It is the longest of this lot and has a longer wheelbase as well. This automatically translates to better knee room on the inside. That said, the XUV300 just falls short by a whisker in terms of wheelbase. Where the Seltos lags though is in terms of width and height where it is bettered by the XUV300 and EcoSport, respectively. The Venue is the smallest of the lot.

When it comes to carrying luggage for your weekend trip, the Seltos has the largest boot here followed by the EcoSport and Hyundai Venue. Surprisingly, the XUV300 which has one of the largest wheelbase, has the smallest boot in this test.

As mentioned above, you’ll need to shell out Rs 35,000 to Rs 59,000 over the sub-compact SUVs featured here for the Seltos petrol while you need to shell out Rs 5,000 to Rs 1.35 lakh for the diesel variant. However, the Seltos HTK Plus petrol undercuts the XUV300 by Rs 45,000. While the premium might sound steep (at least for the diesel models), we feel you should extend your budget to get a Seltos for the following reasons:

We think these are enough reasons to stretch your budget and opt for the Kia Seltos. Yes it might not have the most powerful engines here, but as an overall package, the Seltos excels.

But we want to know your views as well. Will you go for a higher-spec sub-compact SUV or a mid-spec Kia Seltos? Let us know in the comments section below.