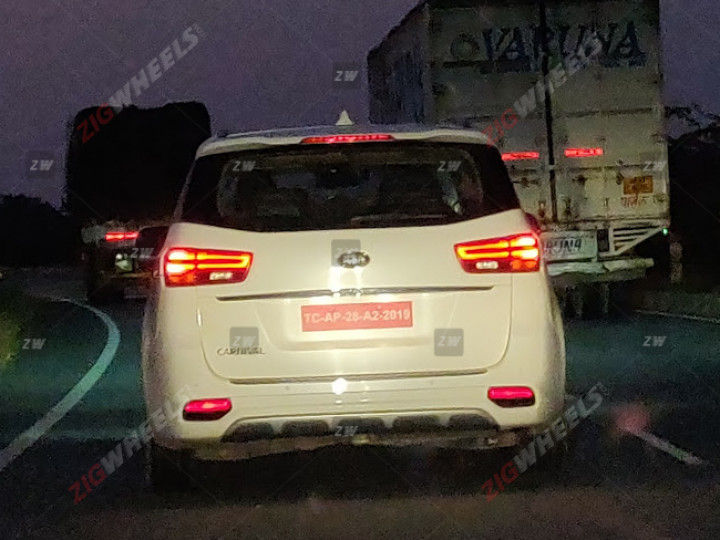 Ahead of an imminent launch at Auto Expo 2020, Kia’s Carnival MPV has been spotted undisguised yet again. The pictures give us a clearer idea of the vehicle’s relative size and road presence.

Compared to its chief rival, Toyota’s Innova Crysta, the Carnival is longer and wider. It also gets a 310mm longer wheelbase. That said, the Innova is 55mm taller than the Carnival.

Sure, the styling is boxy and van-like but Kia has done well to give the Carnival some bling. The signature grille up front, the tasteful use of chrome, and the size-appropriate 10-spoke alloy wheels mean the big Kia will definitely turn heads.

Based on the teaser, we know that the India-spec Kia Carnival will be offered with a luxurious 6-seater layout with captain seats. We expect Kia to offer 7- and 8-seater variants as well. The teaser also reveals key features of the upcoming MPV, including:

The India-spec Carnival will be powered by a BS6-compliant 2.2-litre CRDI engine that develops a healthy 202PS of power and 440Nm of torque. That’s more power and torque compared to the 2.4-litre engine in the BS6 Innova. The Carnival gets front-wheel drive and is expected to be offered with a 6-speed manual and an 8-speed automatic transmission.

The Carnival is Kia’s second model in India after the successful Seltos SUV. It’s expected to be priced between Rs 27 lakh and Rs 36 lakh (on-road), slotting above the Innova Crysta in India.