Kawasaki has upped the ante with the new Ninja 400, but how does it fare against its rivals? Let’s find out 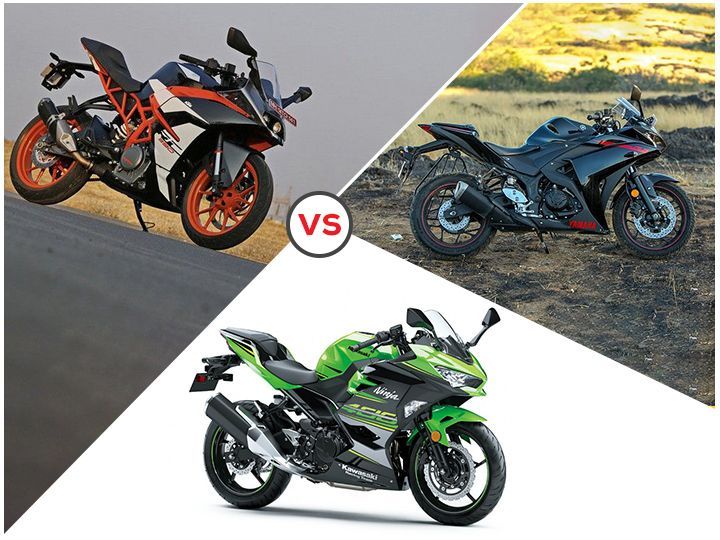 With the arrival of the Kawasaki Ninja 400 the time has now come to put the segment-leading KTM RC 390 and the soon-to-be-reintroduced Yamaha YZF-R3 against the new Ninja. Let’s see how the entry level supersport motorcycles stack up against each other on paper.

Kawasaki has equipped the Ninja 400 with a host of updates to provide a strong competition against its rivals. The new Ninja 400 now gets an assist and slipper clutch which acts both as a back-torque limiter and a self-servo mechanism, which helps in achieving a lighter clutch pull. The Ninja 400 comes with the dual LED headlamps, borrowed straight from the Ninja H2. The same tradition continues at the rear with a Ninja ZX-10R-inspired LED tail light. The instrument cluster of the new Ninja 400 has been borrowed straight from the Kawasaki Ninja 650, which gives the bike a more upmarket appeal.

The updated 2017 KTM RC 390 also comes with a host of new features. Unlike the older model where you had to pay an extra Rs 9000 for the slipper clutch assembly, the new RC 390 comes with it as standard. In addition to that the bike now also features ride-by-wire technology, which gives the bike a smoother and crisper throttle response while eliminating the low speed jerkiness that was seen on the older motorcycle. The 2017 KTM RC 390 now comes with an ECVAP (Evaporative Emission Control System), which restricts fuel vapours from the tank from escaping into the air, thus helping reduce fuel losses. The same LCD display is borrowed from its older predecessor, which shows all the necessary riding information. The headlight and LED tail light setups are also carried forward from the older RC 390. However, they now come with AHO (All-time Headlamp On) function.

When you compare the Yamaha R3 to this duo in terms of features, it unfortunately shows its age. There is no slipper clutch or ride-by-wire, as seen on the Ninja and the RC 390. The part analog and part digital instrument cluster, despite looking outdated, still shows all the necessary information required.

The Kawasaki Ninja 400 employs a new steel trellis frame for better stability and manoeuvrability. This has helped the new Ninja to be more lighter than the Kawasaki Ninja 300 by 6kg, bringing the total kerb weight of the new bike to 168kg. In terms of suspension, Kayaba 41mm non-adjustable telescopic forks do the job at the front and a monoshock unit is employed at the back. Braking is done by a 310mm semi-floating disc at the front, which now comes with Nissin ABS. Kawasaki has employed 110/70-17 and 150/60-17 front and back tyres for maximum traction. The seat height of 786mm is also a boon for riders of smaller sizes.

The KTM RC 390 utilizes the same type of steel trellis frame chassis as seen on the Ninja 400. However, it is more heavier than both of its competition, which can be attributed to the side-mounted exhaust that adds an additional 6kg of weight, bringing it to a total kerb weight of 170kg. Suspension duties are handled by WP USD forks at the front and WP monoshock at the back. The updated RC 390 now also comes with a bigger 320mm front disc brake and 230mm disc  at the rear. In terms of safety features ABS is standard here. KTM has used 110/70 ZR17 and 150/60 ZR17 Metzeler tyres at the front and back respectively. The RC 390’s higher seat height of 820mm can be a problem for shorter riders.

Yamaha uses a steel diamond type frame, which has helped the Japanese manufacturer in achieving a lighter weight of 167 kg (kerb). The suspension duties are handled by normal telescopic forks at the front and a monoshock at the back. In terms of braking the R3 uses a 298mm disc at the front and 220mm disc at the rear. Globally, the Yamaha R3 does get ABS as standard fitment but for India, it was skipped to cut costs. Yamaha has employed 110/70-17M/C 54H MRF front tyre and 140/70-17M/C 66H rear MRF tyre, which didn’t do justice to the bike. A seat height of just 780mm makes the R3 suitable for every type of rider.