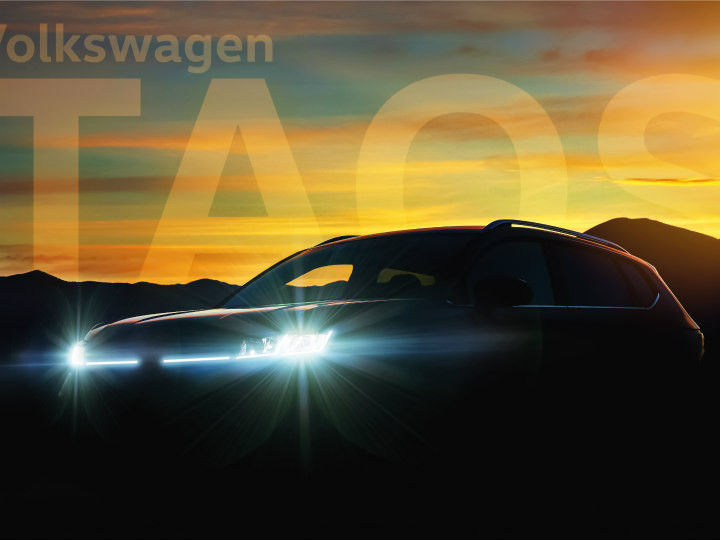 Volkswagen has a range of vehicles that have been developed for specific markets like the Taigun-based Nivus for Brazil, and the Tayron X R-Line for the Chinese market. And now, the carmaker is set to introduce a new mid-size SUV designed specifically for the American market called the Taos. Named after the town of Taos, New Mexico, the upcoming SUV will slot below the Tiguan in Volkswagen’s SUV lineup and will debut in October.

While the teaser image conceals most of the Taos, there are some notable tidbits to glance over. The overall silhouette gives off a crossover vibe with a rugged hood. The most eye-catching bit was its headlight setup where you see an illuminated strip that runs along thw width of the car. This is similar to the illuminated strip seen on the Kia Seltos.

Volkswagen is yet to reveal what’s inside the Taos but it could borrow some equipment from its larger sibling, the Tiguan which received a facelift in July. This may include Volkwagen’s latest MIB3 operating system and connected car technology, a digital instrument display, driver assists and more.

The technical specifications are yet to be revealed, but we expect the Taos to share its powertrains with the Tiguan since both ride on the MQB platform. Currently, the Tiguan is offered with a 1.5-litre TSI petrol engine in 130PS and 150PS states of tune and a 150PS 2.0-litre TDI diesel engine that drives all four wheels. Transmission options are limited to either a 6-speed manual or 7-speed DCT.

The Volkswagen Taos will debut on October 13 and will be manufactured in Argentina. Sales are expected to kick off by 2021. Back home, Volkswagen is expected to bring in the facelifted Tiguan to Indian shores by early 2021. The Taos most likely won’t make it to India since we already have its equivalent, the T-Roc, from Europe. The Taos could be a worthy rival against the likes of the Jeep Compass.