A Closer Look Of The Upcoming Jeep 7-seater SUV

In India, Jeep will take the wraps of its upcoming Toyota Fortuner rival in 2022 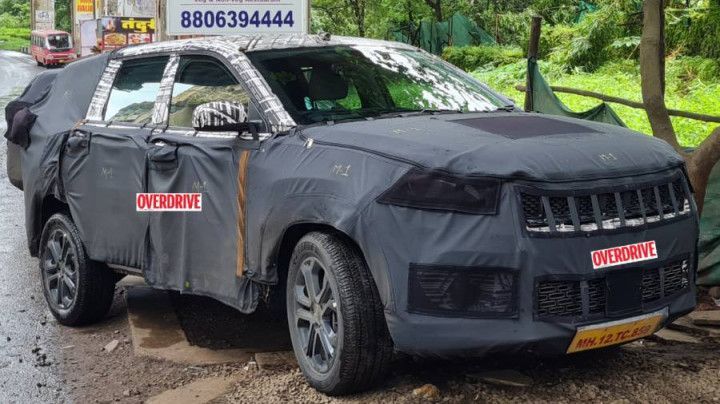 Jeep’s upcoming 7-seater SUV, which could be called the Meridian, has been spotted testing. The latest spy shots give an insight into the Compass-based three-row SUV’s design elements ahead of its launch in 2022.

First things first, the SUV’s wheelbase seems to be longer than the Compass to accommodate the extra row of seats. Then there’s the design, which is inspired by the more premium Grand Cherokee. The camouflage doesn’t give away the styling touches, but we could notice the sleek LED headlamps, tail lamps and the slatted grille with honeycomb mesh inserts. Also, the large air dams and fog lamp housing do add to the presence.

While the test mule was using the Compass’ alloy wheels, the final production model could very well come with a different design to distance itself from the smaller SUV.

We are yet to get a glimpse of the upcoming SUV’s interior. But from what we could gather from the Commander’s teaser (the Brazil-spec 7-seater iteration of the Compass is called Commander), the dashboard design is exactly the same as the Compass, albeit in a more premium black-brown colour scheme with rose gold inserts. Jeep also offers quilted upholstery and suede materials on the dashboard for a more premium outlook.

Also Read: Jeep’s Rival To The Toyota Fortuner Might Not Be Called Commander

Like most three-row SUVs on sale today, the upcoming model is likely to be offered either as a 6-seater with captain seats or a 7-seater with bench seats for middle row occupants. To know more about the SUV’s onboard features and interior, click here.

Under the hood, the SUV is likely to be offered with the Compass’ 170PS 2-litre diesel engine (possibly with more power) and the Wrangler’s 268PS 2-litre turbo-petrol engine. Both units should come with an automatic transmission and all-wheel drive.

The Compass-based 7-seater SUV will be unveiled globally by the end of this year before it’s launched in India in 2022. It’s likely to be priced from around Rs 35 lakh, putting it in the same league as the Ford Endeavour, Toyota Fortuner, MG Gloster, Mahindra Alturas G4, VW Tiguan Allspace, and the upcoming Skoda Kodiaq TSI.