The bike has been built by hot-rod artist Jeb Scoleman around a 2015 Indian Scout engine. The entire body has been hand-made and includes 100 per cent custom metalwork 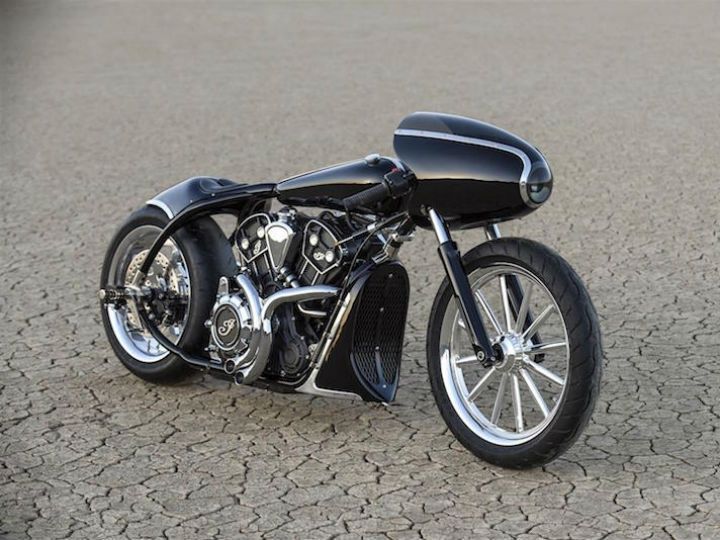 Indian Motorcycle has taken the wraps of a custom Indian Scout built with the sole purpose of racing at the Bonneville Salt Flats.

Called the Black Bullet Scout, the custom bike based on a 2015 Indian Scout has been built by Jeb Scolman.  Scolman is the same hot-rod artisan responsible for the Spirit of Munro that was built to celebrate the launch of the ThunderStroke 111 in 2014.

Jeb was delivered an engine and given full creative freedom to build what he wanted to out of a new 2015 Indian Scout engine. Inspired by pure speed motorcycles from the 1950s and 1960s, Jeb’s design includes 100 per cent custom metalwork with a fork mounted bullet fairing and a minimal frame. As the bike took shape, the folks at Indian Motorcycle started calling it the “Black Bullet” and the name stuck.

The all-custom, all-metal, and all hand-made bike features a custom windscreen that wraps around the front of the bike to fair in the headlight. Tight clip-ons and footrests mounted to the rear axle makes for as streamlined a rider's position as possible.

The minimal seat, controls and shapes all lend themselves to the single mission of exploring this bike's top speed. Scolman even cast a custom intake manifold to turn the throttle body sideways and allow for an even tighter engine packaging.

The Black Bullet Scout will be on display in Sturgis between July 31 and August 8, and is will eventually be raced at the Bonneville Salt Flats.