Peak power has seen a small dip of 3PS 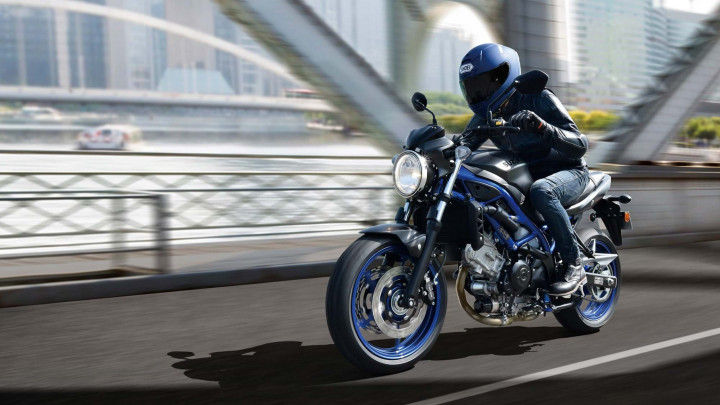 For a motorcycle that has basically been around for over 20 years, with minor styling updates along the way, the 2021 Suzuki SV650 isn’t too shabby looking. The mid-displacement Suzuki naked has received the necessary EU5 updates and could be well on its way to our shores sometime next year. There’s also a cafe racer variant of the same bike called the SV650X, which looks absolutely smashing.

Suzuki hasn’t tinkered around with the design of the SV650, so the naked still looks round and chunky. The 90s design evokes a retro feel with its round headlamp, exposed tubular steel trellis frame, and a 90-degree V-twin. Yes, this is still a Suzuki naked that we are talking about, not some Ducati Monster, although the similarities are quite evident.

What’s new here are the three new colours that you get on the standard SV650 and one new shade on the X trim. The stock bike looks particularly gorgeous in the Pearl Brilliant White colour with a red frame and wheels.

On the SV650X, the bikini cowl, tank extensions and dark brown ribbed rider seat section add to the dark theme that the black body panels and wheels impart. The gold finish on the frame though is an additional visual treat.

Given that it doesn’t have to haul as much heft as its adventure touring sibling, the V-Strom 650XT, the SV650’s 645cc V-twin motor is tuned slightly differently. On this motorcycle, the engine puts out 73PS and 64Nm, 3PS lower than earlier. The EU5 V-Strom’s motor generates 71PS and 62Nm.

The rest of the naked remains the same with a chunky telescopic fork and preload-adjustable monoshock handling suspension duties. 17-inch rims come wrapped with Dunlop tyres. Dual-channel ABS comes in as standard.

Given the price hike that the V-Strom has received, we figure the SV650 could also be priced on the higher side. It is likely to bear a sticker price of around Rs 6.5 lakh for the standard model and around Rs 7 lakh for the SV650X cafe racer trim. Anything lower and Suzuki will have a worthy contender to the Kawasaki Z650 and the upcoming Triumph Trident in India.