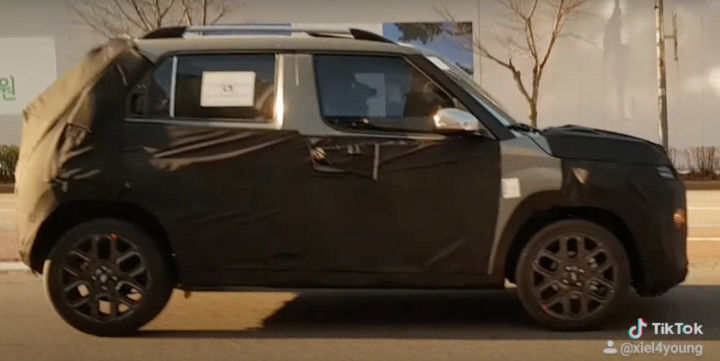 Hyundai has been working on a micro-SUV that will sit below the Venue in the carmaker’s lineup for some time now. The micro SUV, which will rival the Tata HBX, Mahindra KUV100 Nxt, and the Maruti Suzuki Ignis, has been spotted testing in South Korea yet again.

The latest spy shots reveal the side profile of the upcoming micro SUV. Hyundai has done a decent job of making it look SUV thanks to its upright stance and boxy styling. The large alloy wheels, possibly 16-inchers, add flavour to the mix. The front end with its split headlamps reminds us of its close rival, the Tata HBX.

The interior of Hyundai’s micro SUV is yet to be seen, but just like its stablemates, we expect it to come loaded with gizmos. Expected features include a touchscreen infotainment system with Apple CarPlay and Android Auto, climate control, steering-mounted audio controls, a wireless phone charger, keyless entry with push button start, and a multi-info display. Safety should be covered by dual airbags, ABS with EBD, and rear parking sensors.

Technical specifications are yet to be revealed as the vehicle is still under testing. It could come with the carmaker's 83PS 1.2-litre petrol and 75PS 1.2-litre diesel engines. The 100PS 1.0-litre turbo-petrol engine, from the Grand i10 Nios and Aura, could be on the cards as well. A 5-speed manual gearbox is likely to be standard while the automatic variants could be limited to the 1.2-litre engines.

It’s yet to be known if Hyundai’s micro SUV will make it to India or not, but considering Hyundai’s aggressive Indian ops, it could come here to fight it out with the Tata HBX, Mahindra KUV100 Nxt, and the Maruti Suzuki Ignis. If priced around the Rs 5.5 lakh mark (ex-showroom), this SUV could make a splash in the country.