The special edition Xcent gets body graphics, a spoiler and chrome garnishes on the outside, while the insides get a touchscreen infotainment system and red-black seats 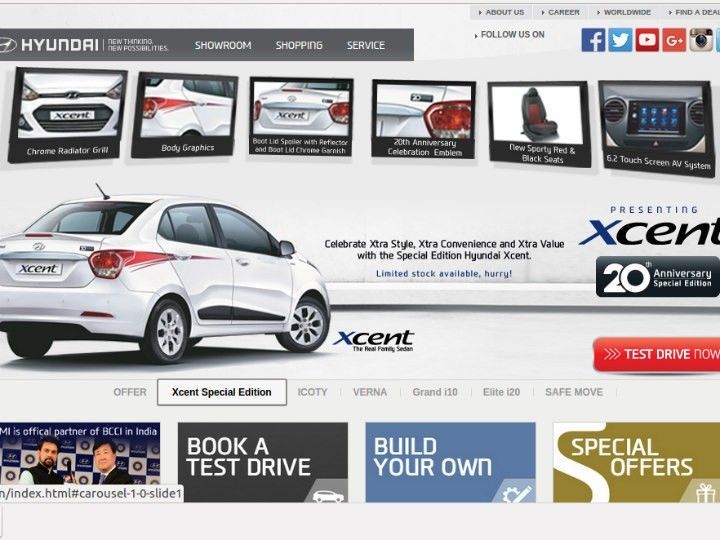 Hyundai has introduced a special edition Xcent at a base price of Rs 6.22 lakh in its petrol guise, while the diesel variant of the same is priced at Rs 7.15 lakh, ex-showroom, New Delhi. The manufacturer has released these variants to celebrate its twenty years of presence in the country.

The special edition Xcent carries a few differences as compared to the standard 'S' trim on which it is based upon. The Xcent special edition gets red graphics on the rear fender that extends towards the front; the boot lid now carries chrome garnish along with a tail spoiler with a central reflector. Other changes include a chrome radiator grille, 20th-anniversary emblem, red and black seats on the inside along with a 6.2-inch touchscreen audio-visual system. This limited version of the car is priced Rs 16,000 more as compared to the variant it is based upon.  Apart from these additions the car remains unaltered, both mechanically as well as cosmetically.

Power comes from the 1.2-litre four-cylinder petrol which produces 83PS of power and 113.7Nm of peak torque. The diesel, on the other hand, is powered by a 3-cylinder 1.1-litre CRDi motor with a 73PS of power and a handy 180.4Nm of torque. These figures are decent enough to take on the competition like the Maruti Swift Dzire, which offers the power of 84.3PS with the petrol and 75PS with the diesel.