Is it just a rebadge or is there more to the retro roadster than meets the eye? 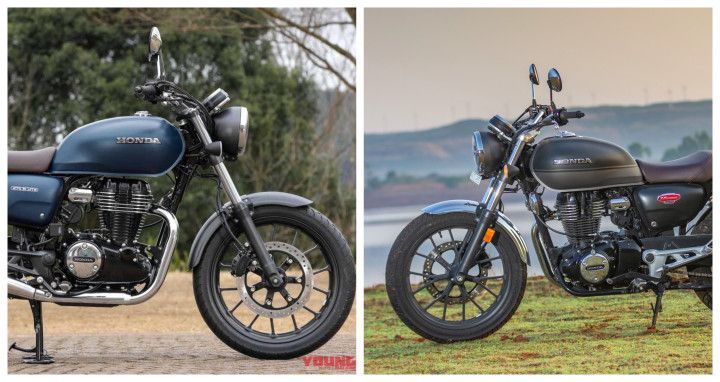 The Honda H’Ness CB350 has taken the Indian market by storm, selling over 10,000 units within just four months of its launch. Back in the brand’s home country, decision-makers started contemplating a launch too, given the popularity of retro roadsters in Japan. Finally, the H’Ness CB350 was launched in the Land of the Rising Sun, rebranded as the GB350. But look closely, and you’ll notice quite a few differences between the Indian and the Japanese model.

Striking off the obvious, the ‘H’ness’ badge. With no ‘Royal’ contender in Japan, the brand has gone for a minimalist ‘GB350’ label on the sides.

The H’Ness CB350 gets a chrome mudguard at both ends, which would undoubtedly appeal to retro-motorcycle enthusiasts. The GB350, however, skips the chrome treatment and opts for matte black fenders at both ends.

The Honda CB350 is equipped with MRF Nylogrip Zapper tyres, while the Japanese have opted for the sport-touring biased Dunlop Arrowmax tyres on the GB350.

Honda has decided to equip the GB350 with a single horn, much like the DLX variant of the CB350. The DLX Pro gets dual horns as standard, which could be offered as an accessory with the GB350.

The cast aluminum section -- holding the pillion footpegs and the exhaust -- receives a brushed silver paint on the CB. However, the Japanese model gets a graphite-grey finish that blends well with the blacked-out engine.

Despite its retro appearance, the Honda H’Ness CB350 DLX Pro is loaded with modern features like traction control and Bluetooth-connectivity, functions that can toggled through the switchgear. However, the GB350 seems to be missing out on that, like the DLX variant of the H’Ness in India.

Though the official list is not out yet, the livery on the GB350 prototype showcased in Japan is not available in India. The matte navy blue with the brown seat adds to the retro appeal of the bike.

Honda hasn’t announced the official performance figures of the GB350 yet. However, expect the CB350’s 2-valve 348cc air-cooled engine producing 21PS and 30Nm. While it may not seem too interesting on paper, our review will tell you why the H’Ness CB350 feels at home even in 2021.