Check out the new Hero naked in all angles 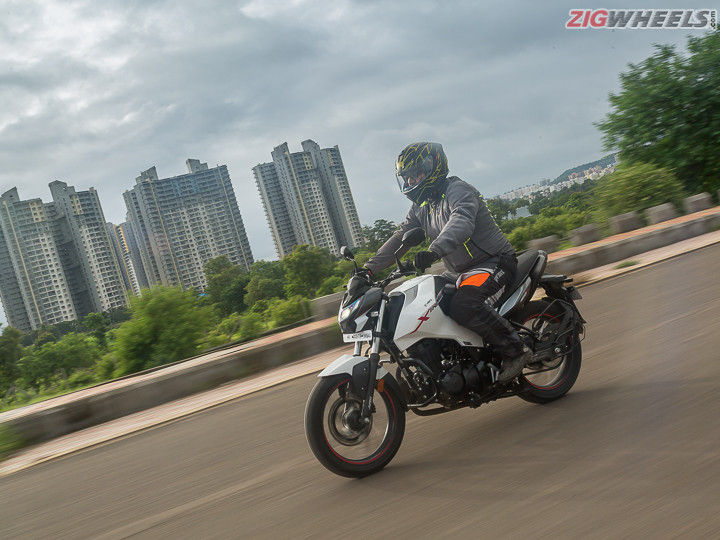 The Hero Xtreme 160R is one of the best things to have come across our way in this crazy 2020. Hero has been working on the bike for over two years now and we are glad that the efforts put in by the engineers at the Hero CIT in Jaipur have given us a brilliant motorcycle. We are quite spellbound by the way she handles and while it might not be the quickest in its class, it does enough to leave a wide grin inside your helmet. Here’s what it packs:

It is quite heartening to see motorcycle manufacturers pulling off a production-ready design that looks virtually the same as its concept. The same can be said about the Xtreme 160R and the Xtreme 1.R Concept on which it is based. While bits like the USD fork, solo seat and a carbonfibre rear wheel were bound to be dropped, we are glad that the rest of the motorcycle looks almost the same.

And that means you get this robotic LED headlamp that works brilliantly. The high beam calibration could have been better but no qualms overall.

The single-piece panel is cleverly designed. It lends the bike a clean look.

The tail is short and compact with a dark smoke visor found on the H-shaped LED tail light.

The overall material and build quality on the Xtreme 160R is extremely commendable but we aren’t quite on board with the switches used on the bike.

The console is a negative LCD display with legible fonts and is neatly laid out. It does miss out on a gear position indicator and a range indicator.

Riders of all heights will appreciate just how easy it is to get astride the Xtreme 160R. The single-piece seat has a nice humpback to it. The 790mm saddle height is low and pretty much similar to all other bikes in the class.

The posture hints at sportiness as there is a slight forward arching to get to the bars. The neutral pegs don’t make you feel cramped and the roomy seat will make sure you are ensconced in comfort.

15.23PS and 14Nm from the 163cc motor is one of the highest performance outputs in the class. But rather than outright performance, the engine is tuned to do rather well in the city.

It is quick, though not as quick as Hero claims. But it is on par with its 160cc rivals. Where it does outscore the others is in city fuel efficiency, delivering 55.47kmpl.

The highlight of the motorcycle remains its foundations. The suspension is tuned to handle Indian roads perfectly.

It is very light and agile, tackling corners with just as much tenacity as it does bumps.

Hero offers the Xtreme 160R in two variants. At the rear, you can either opt for a 130mm drum or a 220mm disc brake. The 276mm front petal disc brake is common across both trims and so is the single-channel ABS.

The Xtreme 160R is a delightful motorcycle that one can enjoy while commuting as well as on the weekends. For someone who is learning the art of sport riding, it proves to be a worthy companion. Can it outshine the TVS Apache RTR 160 4V? Stay tuned for a proper comparo coming soon on ZigWheels.com.