Hero Electric is planning to launch these scooters really soon! 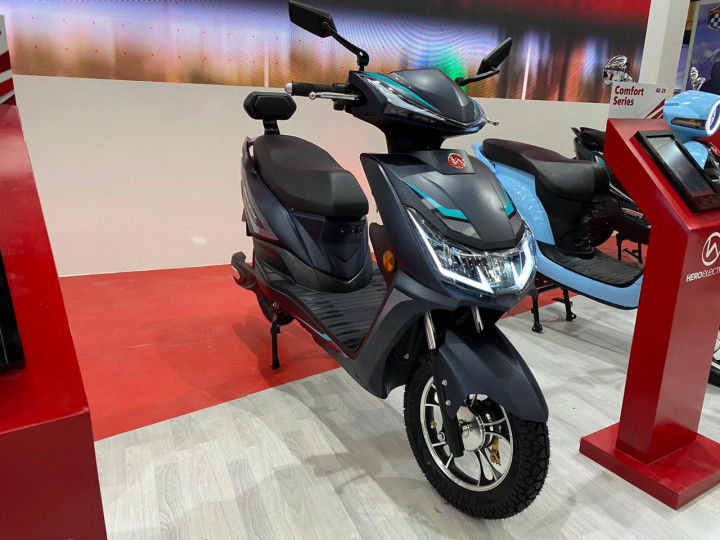 Electric two-wheelers seem to be all the rage at Auto Expo 2020. Now, Hero Electric has unveiled a range of electric two-wheelers for the domestic market. Along with a motorcycle and a trike, the EV manufacturer has unveiled two electric scooters with unusually long names. The grey scooter is called the Comfort Series AE-29, whereas the blue one is called the Trend Series AE-8.

As of now, Hero Electric hasn’t announced any details about the AE-29, but we expect the manufacturer to announce something soon. The AE-29 is powered by a 1kW motor and gets a 3.5kWh lithium ion battery pack. Hero Electric claims the battery pack can be fully charged in 4 hours. It doesn’t boast an insane range like the AE-47. Instead, it offers a modest range of 80km, which should be more than enough for daily city use. The AE-75 offers the same range, but the top speed is capped at 45kmph.

Feature-wise, there’s literally everything in there that you’d find on most of electric two-wheelers out there. For starters, it gets a digital instrument console, LED headlamp, Bluetooth connectivity, anti-theft alarm, and more.

Suspension duties are taken care of by a telescopic fork up front and twin gas-charged shock absorbers at the rear. Anchorage is provided by drum brakes at both ends coupled with CBS (Combined Braking System). The AE-75 gets similar underpinnings, but the only difference is that it gets a conventional twin shock absorber at the rear.

Since 80kmph and 45kmph might be a wee bit too much for some, Hero Electric showcased a third scooter as well, aimed at people who love to ride at a walking pace. That’s right, the AE-8 gets a top speed of 25kmph.

There’s no official timeline yet, but Hero Electric is planning to launch the electric scooters in India soon. But until we get to ride one, why don’t you tell us what you think of these scooters in the comments section?