Which Of These Electric Motorcycles Is Top Dog? 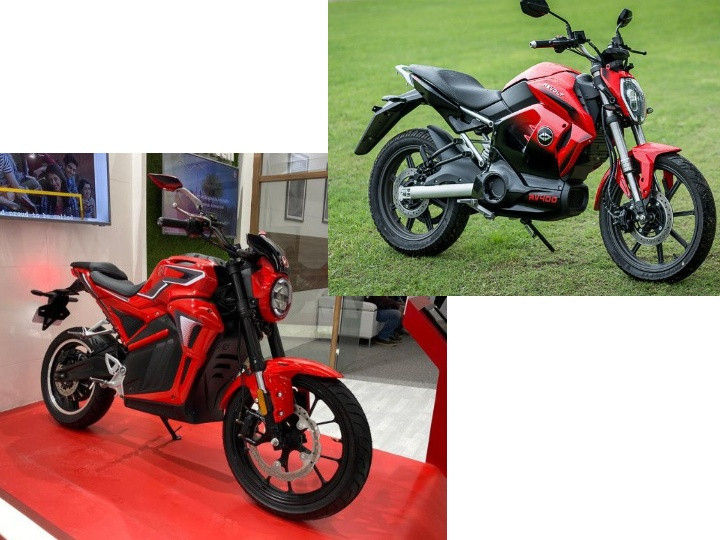 So far, the majority of the electric two-wheelers on the market have been e-scooters, but this year’s Auto Expo showed an interesting trend, with multiple new electric motorcycles on display as well. Most impressive among these was the Hero Electric AE-47 - a naked streetfighter that seems to have borrowed quite a lot of its design cues from the Honda CB300R. The only other electric motorcycle currently available to buy is the Revolt RV400, which sits in a similar space as far as specs are concerned. So we decided to pit them head-to-head and see who comes out on top, on paper.

It’s the newcomer that has the upper hand in this area - the AE-47’s 4kW motor edges out the RV’s 3kW unit. The difference is apparent in claimed top speeds as well, with Hero Electric claiming the AE-47 can get up to 85kmph in Power mode (the other mode being Eco), while the Revolt manages just 80kmph in Sport mode. This further falls to 65kmph in Normal mode and just 45kmph in Eco. While the difference in top speed might not be very large, the gap in acceleration figures will probably be more significant. Hero claims that the AE-47 can complete the dash to 60kmph in under 9 seconds.

It’s also worth noting that the AE uses a hub motor while the RV has its mounted in the belly, with drive then transferred via a belt. This should theoretically make the Hero the quieter of the two, but silence obviously isn’t a high priority on the Revolt, since the bike allows you to choose between four different synthesised engine sounds.

Having been unable to carry out road tests for either of the two, we’ll have to rely on claimed figures for this segment of the comparison. Once again, it’s the Hero that seems to have the advantage, because despite being the quicker motorcycle of the two, it still offers the higher range - 160km in Eco mode, compared to the RV400’ 150km. The Revolt’s ARAI figure of 154km puts it slightly closer to the AE-47, but the real world range will likely be a lot lower for both bikes.

The numbers make sense when you take a look at battery capacities. The Hero’s 3.5kWh unit is marginally bigger than the RV’s 3.24kWh battery pack. Both bikes use lithium-ion packs. Despite packing in the larger battery of the two, the Hero claims to complete a full charge in just 4 hours while Revolt claims 4 and a half hours. 75 per cent charge comes up in just 3 hours on the Revolt, though. Another positive for the Revolt is its battery swapping capability, though you’ll need to be quite the strongman to lift the 18kg behemoth out.

The theme of the Hero’s superiority continues here as well. Though both motorcycles sport a USD fork and monoshock, the AE-47’s290mm front disc brake trumps the RV400’s 240mm unit. The Revolt claws it back with a bigger 240mm rear disc compared to the Hero’s 215mm unit, but since most of the stopping power comes from the front brake, we think the Hero holds the upper hand in the anchorage department.

It also sports chunkier rubber than RV400 (but from an unheard of, likely Chinese brand), though it rolls on an unconventional 16-inch rear wheel, while the Revolt gets 17-inchers at both ends. Both motorcycles have commuter-ish riding postures and performance levels, so the RV’s 108kg kerb weight should make it a little more agile and maneuverable in traffic than the 120kg AE-47.

On paper, it does seem like the Hero is the better motorcycle of the two on most fronts, but we’ve ridden the Revolt and experienced just how conventional its riding experience is. With prices yet to be declared for the Hero and real-world range numbers yet to be tested for both bikes, we’ll have to reserve final judgement until we get our hands on both bikes.