GWM Debuts In India With Haval At Auto Expo 2020: A Closer Look 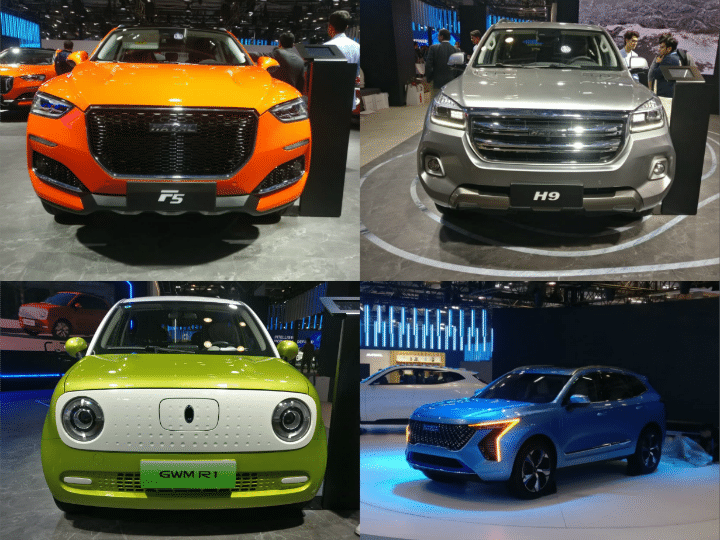 Auto Expo 2020 saw many returning manufacturers as well as a few first-timers. Among them was Chinese carmaker Great Wall Motors (GWM) making its debut in India. Its lineup featured a host of models from the Haval and Ora brands. Kicking things off from Haval was the H9 SUV, followed by the F5, F7 and F7x SUVs. It also showcased two concepts in the form of the Vision 2025 and Concept H PHEV. The R1 EV hatchback spearheaded proceedings for Ora at the expo. Let’s take a closer look:

At the GWM pavilion, the EV spotlight was on the Ora R1 electric hatchback. It will also make it to  Indian showrooms soon. It produces 47PS and 125Nm, juiced up by a 33kWh battery pack to top out at 100kmph. It sports a relatively simple design and is packed with features like a digital instrument cluster and a floating touchscreen infotainment system. Here’s more about it.

Next up is the Haval H9 that could potentially rival the Ford Endeavour, MG Gloster, Toyota Fortuner, and Mahindra Alturas G4 in India. It gets a butch design with modern features like a digital instrument panel, a touchscreen infotainment system, and a panoramic sunroof. It is powered by a 221PS 2.0-litre petrol mill in Chinese markets. Expect the Indian model to get a diesel motor. Get details.

The F5 showcased at Auto Expo 2020 is essentially equivalent to the Hyundai Tucson and Jeep Compass. It could also make it to India. It sports more of a crossover-like design rather than an SUV. Interiors feature a simple and no-nonsense dashboard design. A 1.5-litre turbocharged petrol engine developing 168PS of power and 285Nm of torque powers the SUV. The India-spec model could come with a diesel engine as well. Here’s a closer look at this svelte SUV.

Haval showcased the F7 and F7X SUVs that feature different design highlights. One of the major differences is that the F7 is a traditional SUV, whereas the F7X features an SUV coupe design. Both models have an attractive dashboard design with a 9-inch touchscreen infotainment system and a flat-bottom steering wheel. The two SUVs are powered by two petrol engines: a 1.5-litre 150PS unit and a 2.0-litre 190PS unit. Read more about the Haval F7 and the F7X .

Haval also showcased two concept cars at the expo. One of them was the Vision 2025 concept SUV. It sports a relatively clean design with sleek headlamps and connected tail lamps. On the inside, however, it gets a host of modern equipment such as facial and biometric recognition, connected car tech, and an augmented reality head-up display. Here’s when we can expect a production-spec model.

The other concept from Haval at Auto Expo 2020 was the Concept H PHEV SUV. It has a more aggressive design in comparison to the Vision 2025 with bits like fang-shaped indicator lamps, LED DRLs at the front, and LED elements in the tail lamp. Highlights on the interior are a floating touchscreen infotainment system and a head-up display. It could be powered by a BS6 1.5-litre turbocharged petrol engine in its production guise. To know when it could make it to India, head here.