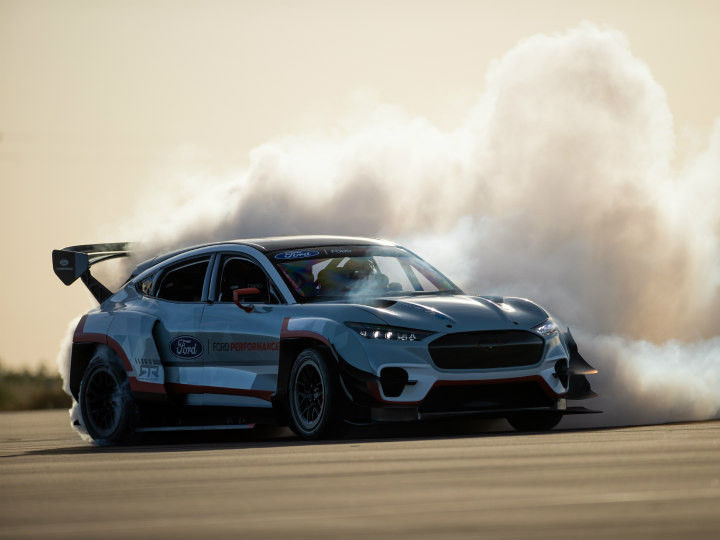 When Ford’s first electric offering, the Mustang Mach-E, was unveiled back in November 2019, it broke the long-standing tradition of the Mustang moniker with the addition of not just any SUV, but an all-electric one. This raised some doubts over whether the Mach-E was really worthy of the Mustang name. Well, Ford has just gone bonkers on the Mach-E and unveiled the Mustang Mach-E 1400 prototype racer. And we can say that ‘ludicrous’ is an understatement to describe what this beast is capable of.

Built as part of a collaboration between Ford Performance and RTR, the Mach-E 1400 prototype boasts a whopping 1400PS of power as its name suggests. In comparison, the top-spec Mach-E GT variant puts out 459PS of power and 830Nm of torque. That’s a power jump of around 941PS! Unfortunately, Ford hasn’t revealed sprint times or a top speed figure for the Mach-E 1400, but we can expect it to be a zippy beast anyway.

How many electric motors are required to generate this amount of power you may ask? Well, it has seven motors juiced up by a 56.8kWh battery pack. Yes, seven electric motors! Five more than the Mach-E GT variant. Three of these motors are attached to the front differential and four to the rear in pancake style with a single driveshaft connecting them to the differential. This system is adjustable to set the prototype racer up for either drifting around corners or pure track-racing.

Power isn’t everything in the Mustang Mach-E 1400 as modified aerodynamics including the front splitter, dive planes, and massive rear wing make the prototype capable of producing an earth-shattering 1,043kg of downforce at speeds of 247kmph. Other technical wizardry includes Brembo brakes, an electronic brake booster to aid regenerative braking combined with ABS and traction control, and a hydraulic handbrake for easier drifting.

The Mustang Mach-E 1400 is pretty flexible when it comes to adaptability as its drivetrain can be configured for rear-wheel drive, all-wheel drive and front-wheel drive setups. For drifting or track  setups, there are different control arms as well as steering configurations.

Ford is set to debut the Mustang Mach-E 1400 at a NASCAR event sometime later this year. Since this is a one-off prototype, don’t expect it to go into production. Although it will serve as a test bed for components that may find their way into future models. For instance, the hood is made of organic composite fibres which is a lightweight alternative to the carbon fibre inserts around the rest of the prototype. What do you think of Ford’s latest contraption? Let us know in the comments below.