To get cosmetic updates, new equipment and a new petrol engine 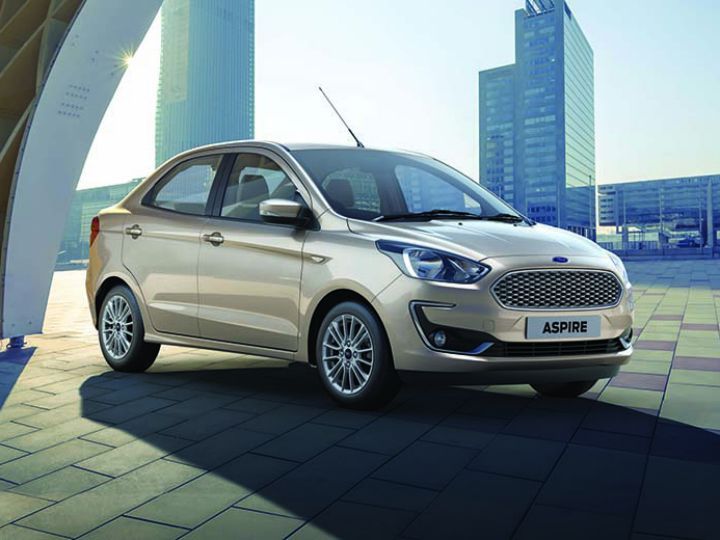 Ford is set to launch the Aspire facelift tomorrow, 4 October 2018, almost three years after the model was first launched here. While not all details about the Maruti Suzuki Dzire rival have been revealed, here’s what we expect Ford to offer beginning tomorrow.

If you found the Aspire a bit boring to look at, the new one is certainly going to change that opinion. It’s not wildly different from the outgoing model, but it does get new elements which make it look less Plain Jane. Changes to the Aspire facelift mimic the design elements introduced on the new Freestyle, though instead of the sportier black inserts, the Aspire features chrome bits.

This includes a bold new chrome grill, which is more angular than before. The bumper has been redesigned with a wider air-dam, C-shaped chrome inserts on the corners and circular fog lamps.

At the side, the simple but muscular lines continue, but Ford has added a larger ORVM which is both better aesthetically and should give a wider field of view rearward. Larger 15-inch multi-spoke alloy wheels should also make the Aspire look better, both at standstill and on the move.

At the rear, the changes include a new bumper which gets cuts, creases and a chrome highlight to reduce the visual bulk. And while the tail lamp design looks similar to the older car, the crease from the bumper flows into them and gives it slightly more character than before.

Inside, the overall design remains the same, which is a shame as the all-beige interior of the outgoing model was a dirt magnet and quite simple looking at most times.

The new Aspire is expected to be more in line with the competition in terms of the equipment on offer, especially with the addition of a new 6.5-inch touchscreen SYNC3 infotainment system. While Ford may offer some features like Android Auto and Apple CarPlay smartphone connectivity only on the top-of-the-line variant, almost every variant of the new compact-sedan will get a touchscreen-based infotainment system.

Other feature additions expected to be carried over from the Freestyle include cruise control, automatic headlamps and rain-sensing wipers. Unfortunately, based on the photos of the Ford Ka launched in Brazil, it looks like the Aspire will not be offered with a climate control system, unlike the competition.

In terms of powertrains, Ford may continue to offer the same 1.5-litre, 4-cylinder turbo-diesel as the older car, which develops 100PS/215Nm paired with a 5-speed manual transmission. The Freestyle’s 1.2-litre, 3-cylinder ‘Dragon’ petrol engine is expected to replace the older 1.2-litre, 4-cylinder motor. The new engine develops 96PS/120Nm, a significant upgrade in terms of performance, and is paired with a 5-speed manual transmission on the Freestyle. Will Ford try to attract those looking for an automatic sedan by offering the 1.5-litre 'Dragon' engine paired to the 6-speed automatic transmission from the EcoSport? We will have to wait till the launch tomorrow!

The new Ford Aspire is expected to be continued to be priced aggressively when compared to the competition, which includes the Maruti Suzuki Dzire, Honda Amaze, Hyundai Xcent and Volkswagen Ameo. The pre-facelift Aspire is priced in the Rs 5.72 lakh to Rs 8.46 lakh, ex-showroom Delhi.