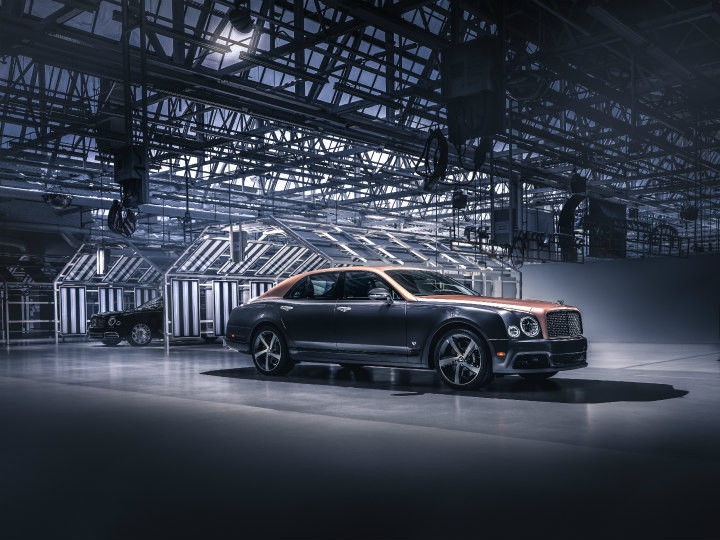 After a little over a decade, Bentley’s flagship sedan, the Mulsanne, has decided to call it quits. The discontinuation of the full-size ultra-luxury saloon, which was introduced in 2010 to rival the Rolls-Royce Phantom, also marks the death of Bentley’s grand old 6.75-litre V8 motor that first appeared in the 1959 Bentley S2.

Bentley says over 700 people have spent 3 million hours handcrafting more than 7,300 Mulsannes at the English carmaker’s facility in Crewe. The final unit to roll off the facility, the 6.75 Edition by Mulliner, is a part of 30 commemorative, limited-edition cars built to bid goodbye to Bentley’s flagship sedan.

“The Mulsanne is the culmination of all that we at Bentley have learned during our first 100 years in producing the finest luxury cars in the world,” said Adrian Hallmark, Bentley Chairman and Chief Executive. “As the flagship of our model range for over a decade, the Mulsanne has firmly solidified its place in the history of Bentley as nothing less than a true icon. I am immensely proud of the hundreds of designers, engineers and craftspeople that brought the Mulsanne to life over the last ten years. Now, as we begin Bentley’s journey to define the future of sustainable luxury mobility through our Beyond100 strategy, the role of Bentley’s flagship is passed to the new Flying Spur,” he added.

There could be many reasons as to why Bentley decided to pull the plug on the Mulsanne. Having just recovered from some very trying times, it must have been impossible for the carmaker to pool in its resources to build a new generation version of its flagship sedan when it could use them to build SUVs like the Bentayga that helps it rake in solid profits.

While the Bentayga is nowhere near as expensive as the Roll-Royce Cullinan, rumours suggest that Bentley could be working on a bigger, more luxurious SUV to take on its arch-nemesis' flagship SUV. Besides, Bentley’s core markets of US and China have been switching from luxury sedans to SUVs at such a rapid pace that carmakers simply cannot keep up with the demand.

As for the Flying Spur, the latest generation was designed to be as opulent as the Mulsanne anyway. It offers as many paint choices and upholstery options as the Mulsanne while being based on the same platform as the Porsche Panamera, arguably one of the best sedans out there today.

What really tugs at our heartstrings, however, is the loss of the ‘longest-running V8 engine in automotive history’: the Bentley L Series 6¾ Litre Twin Turbo. With a heritage dating back to the 50s, this old-school V8 has undergone many updates over the years and has powered various Rolls-Royces and Bentleys in the past. In the Mulsanne, it produces 512PS of power and an astounding 1020Nm of torque at just over 1750rpm! Sadly, Bentley says stringent emission norms have made it next to impossible to update this motor without compromising on performance. And if that wasn’t enough, the Continental GT and Flying Spur’s 6.0-litre twin-turbo W12 engine, sourced from parent company Volkswagen, is also on its way out. We can’t help but think that with the current pandemic and the loss of glorious engines and cars, we might as well opt for that apocalypse that’s been pending since 2012!