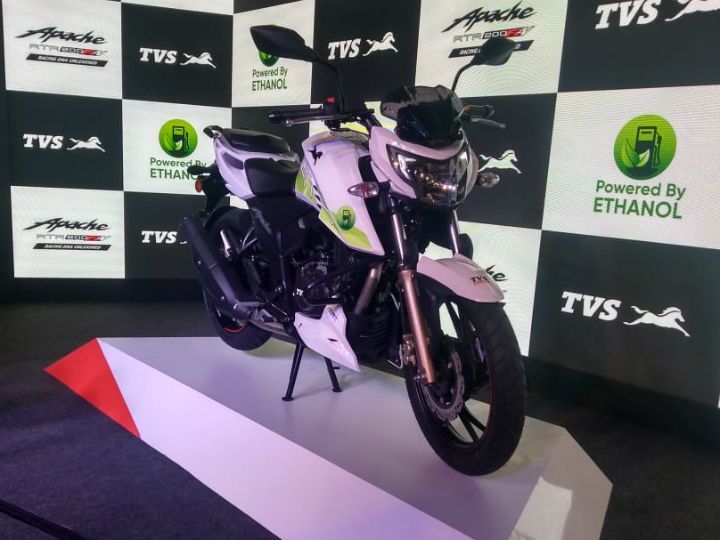 Looks identical to the petrol-powered variant:
Given that the ethanol conversion requires only changes to the engine’s internals, the ethanol-powered bike carries the Apache RTR 200 4V’s bodywork and features like LED DRLs, LED tail lamp and a fully-digital instrument console. The only difference between the ethanol- and petrol-powered variant is the white paint job with lime green graphics and the ‘Ethanol’ decal on the fuel tank.

4. Benefits of ethanol:
Ethanol is a biofuel, meaning it can be produced using renewable resources. The main products used to prepare ethanol are molasses, sugarcane juice and biomass. This is an environmentally friendly fuel and can be domestically produced too. On burning, it produces less harmful emissions than conventional fuel. Also, the price of ethanol is substantially lower than petrol.

5. Viability:
Ethanol has a lot of benefits, chief among them being the low emissions and significantly lower running costs. TVS has priced the Apache RTR 200 Fi E100 at Rs 1.2 lakh (ex-showroom, Delhi). At this price, it is just Rs 8,600 more expensive than the carburetted Apache RTR 200 4V ABS. Given the fact that ethanol costs less than 62 per cent the price of petrol, on paper, the Apache RTR 200 Fi should be ridiculously affordable to run. However, the production and distribution of ethanol in India is still at a nascent stage. That raises a serious question on the viability of the ethanol-powered Apache RTR 200 Fi E100 - for now, at least. Also, the motorcycle is only available in Maharashtra, Karnataka and Uttar Pradesh for now.