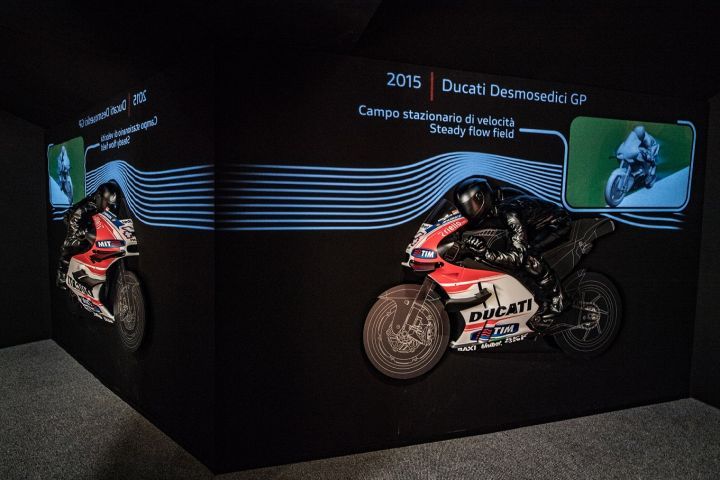 Ducati has inaugurated its ‘Anatomy of Speed’ exhibition at its Aerodynamic Museum in Borgo Panigale, Italy. The exhibition showcases the role of aerodynamics in winning MotoGP races through photos, videos and display panels. Visitors will also get a chance to look at various research programs, developed by the brand over the years.

Sounds like something right up your alley? Well, better book your tickets now, as the exhibition will end on 8 October 2019.

Borgo Panigale, Bologna, 30 May 2019: Ducati has inaugurated the “Anatomy of Speed” exhibition - the third temporary show organised and hosted by the Ducati Museum - which will continue until 8 October 2019.

The exhibition illustrates how aerodynamics plays a key role in achieving the performance that is the hallmark of Ducati excellence. Firstly, visitors will be introduced to aerodynamics as Ducati sees it. The exhibition then examines the research programs and solutions developed over years of intense involvement in racing.

Aerodynamic history is brought to life by photos, videos, display panels and projections that provide the backdrop to - and interact with - an exclusive exhibition of two fairings used by Ducati in the 2016 and 2017 MotoGP championships and of the Ducati Desmosedici GP16.

“I'm extremely proud to inaugurate this third temporary exhibition at the Ducati Museum: indeed, aerodynamics makes bikes magic. This exhibition also aims to involve Ducati enthusiasts in that transfer of knowledge from racing to product that has always been a part of our DNA” stated Claudio Domenicali, Ducati CEO.

“Our commitment aims to ensure Ducati riders benefit from ever-better technology, performance, fun and safety; aerodynamics play an increasingly important role in this philosophy, which is exemplified by the Panigale V4 R.”

“Aerodynamics is undoubtedly an area in which Ducati Corse leads the way with respect to other manufacturers", stated Luigi Dall’Igna, General Manager of Ducati Corse. "It's one of our top-priority fields of development, the goal being to achieve ever-better results in the future.”

A major contribution to the organisation of the exhibition also came from our MotoGP friends and technological partners: Lenovo, NetApp, UnipolSai, Riello, Brembo, Cima and VarGroup. The temporary “Anatomy of Speed” exhibition opens to the public on 30 May 2019 and can be visited, at the Ducati Museum entrance price, until Tuesday 8 October 2019.