The two Italian supermotards are as similar as parmesan and mozzarella 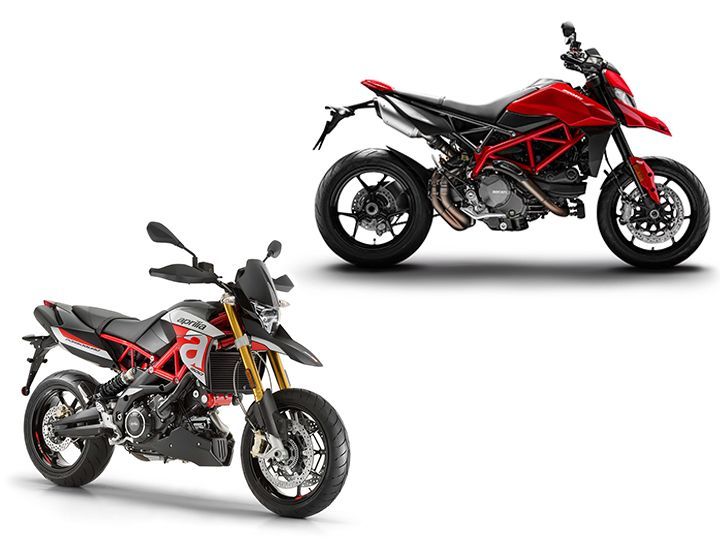 There are dirt bikes, there are nakeds and then there are supermotos. The latter borrows design cues and vehicle setup from dirt bikes and combines them with an insanely powerful motor from a naked, resulting in the formation of the ultimate hooligan. The two motorcycles that we have here seem to have a lot in common. Both are Italian. Both have a 90-degree V-twin motor. And both look like proper supermotos. So which one should you get? Bologna’s Ducati Hypermotard 950 or Noale’s Aprilia Dorsoduro 900? Here’s how they stack up on paper.

Park them next to each other and there is no doubt that both of them stay true to the supermoto styling theme. Still, both could not look more different from the other. The Dorsoduro 900 is the smaller sibling to the Dorsoduro 1200. The tank panels get several cuts that narrow down towards the rider seat, while the tank extensions engulf the side of the radiator as well. The headlight unit is obviously small, but it feels smaller due to the protruding beak, kind of like an motocross bike. The tail unit is slim despite the presence of underseat exhaust end cans. It is a slim design and that centralises the 220kg kerb weight nicely.

Also Read: Ducati Hypermotard Through The Years: Evolution Of The Italian Supermotard

The Ducati packs everything the Dorso gets, albeit in a more compact form. The tank looks deceptively small but is in fact larger than the one on the Aprilia (Ducati’s 14.5-litre vs the Aprilia’s 12-litre). The beak is shorter and looks more aggressive thanks to the twin vents. The derriere does not have the same neat one-piece finish like the Dorso, but it is visually narrower. Even though both bikes have offset-mounted monoshocks, the Ducati has a single-sided swingarm, which looks quite stunning in the flesh. Not only is it smaller in length, but also lighter as well. By a whopping 20kg at that! Round one goes to the Ducati.

Seems like a no brainer here, right? The Ducati just walks away when it comes to outright performance. It will certainly be the one that puts a wider smile on your face when you wring the throttle open. And if things start to get a bit too nervous, it also has the better electronics package to make sure you stay on the saddle. There is plenty of torque available from as low as 3000rpm too.

Even though it is 6Nm short on the Hypermotard 950, 90Nm is more than enough to tickle anyone and carry out one-wheel-up antics. Where the Dorsoduro 900 scores higher is the friendly nature in which the power is delivered. It dials in nicely and smoothly, making sure it doesn’t scare noobs away. Had this been a naked, one could have still have made a case for it. But we are talking supermotos, more specifically supermotards. And terms like ‘friendly’ and ‘smooth’ don’t hold much relevance in these manic machines. Its two-nil Ducati, and things aren’t looking good for the Dorsoduro 900.

The Ducati is the more sophisticated motorcycle here thanks to the better kit on offer. The Marzocchi USD as well the Sachs monoshock offer more adjustability than the units found on the Dorsoduro 900. While the front braking units are the same on both bikes, the Ducati has an edge with a slightly larger rotor and twin-pot callipers. Plus, the ABS unit on offer, which is calibrated by Bosch, uses a six-axis IMU (inertial measurement unit) to provide necessary intervention. It is needless to say the Pirelli rubber is far superior to the Dunlop ones.

Pricing and Verdict
Even when the old Hypermotard 939 was on sale in India, the Ducati was more affordable than the Aprilia Dorsoduro 900 by nearly Rs 2 lakh. The latter went on sale for Rs 12.87 lakh (ex-showroom India) and that was a big premium that one had to pay for a niche product. While Ducati India is yet to reveal the prices of the new Hypermotard 950, our hunch is that it could be priced identical to the Dorsoduro 900. While many would consider it bonkers, you are getting a bonkers motorcycles as well. Clearly, the Ducati Hypermotard 950 is the motorcycle to get, especially when you consider Ducati has a better retail and after-sales network than Aprilia.