While DC2’s car modifications are usually extreme, its latest contraption may seriously dent the Thar’s appeal rather than elevate it 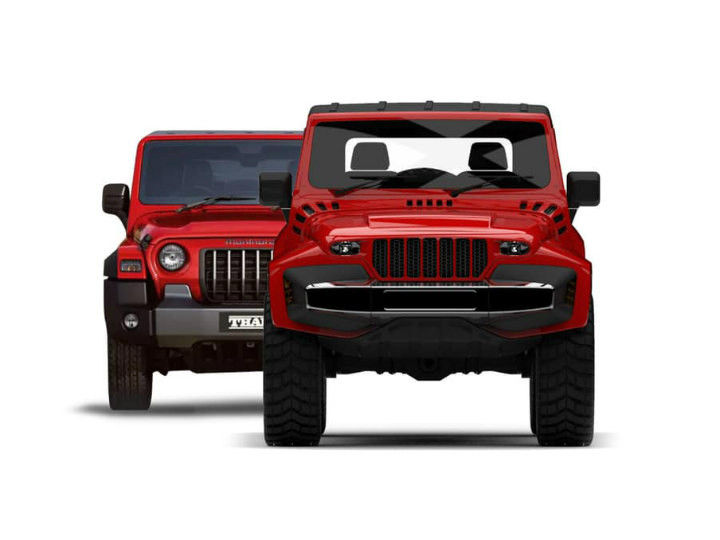 DC2 is known for creating wacky concept cars and giving existing cars an extreme makeover. The latest model to get a DC2 body kit is the recently launched second-gen Mahindra Thar. Well, we can safely say that it may have created an abomination for the rather appealing off-roader.

Starting up front, the DC2’s revamp of the front end is weird, to say the least. The big circular headlights have been replaced with extremely tiny units, flanked by a smaller seven slat grille. Below that, you get a single piece bumper which doesn’t seem to gel well. Also, no idea why there are vents right below the windshield as it doesn’t really add to the look at all.

Heading over to the sides, it looks pretty much unchanged aside from the knobby tyres and wrapped around chrome-finished pressed steel wheels, which seem to have been taken right out of a monster truck. At the back, there’s another weird single-piece bumper, like the one up front, with a split tail light setup that really shouldn’t have been tampered with as the original one would have been a better fit even in this body kit.

All in all, the design of this Thar DC2 body kit may have tried to mimic a Hummer, but it looks unrecognisable and more of a downgrade. It’s a classic case of ‘if it ain't broke, don't fix it’.The new Thar is already appealing in its original form. In fact, the carmaker’s range of accessories further enhances the appeal of the off-roader.

The next-gen Mahindra Thar is priced from Rs 9.80 lakh to Rs 13.75 lakh (ex-showroom). It is offered in three trims: AX, AX Opt and LX trims. Bookings can be done either online or at authorised dealerships for a token amount of Rs 21,000. The Thar has already received over 15,000 bookings so far! Deliveries will commence from November 1. It will go up against the upcoming Maruti Suzuki Jimny and Force Gurkha.