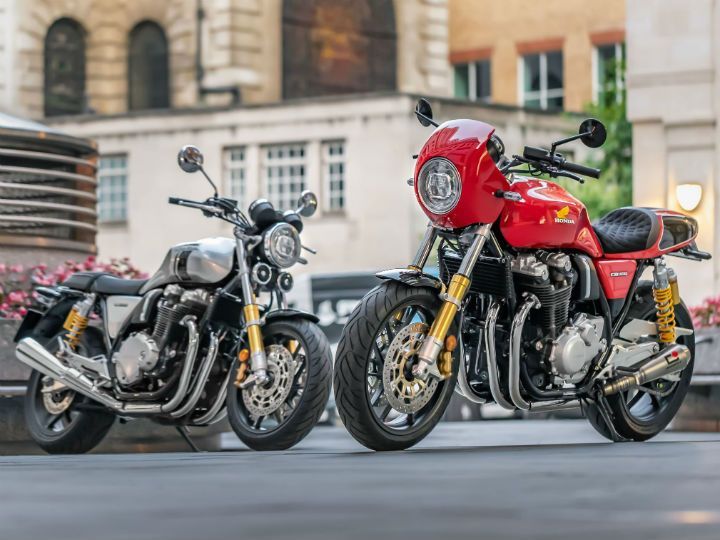 The Honda CB1100 is one of the few properly retro motorcycles powered by an air-cooled inline-four motor. It stands as a beacon of hope in an industry that’s slowly moving away from all things old-school. 5Four Motorcycles, a UK-based custom bike builder, has now collaborated with Honda UK to introduce the CB1100 RS 5Four custom bike in the country. It comes with an on-road price tag of £15,554 (Rs 13.86 lakh), which is £5,555 (approximately Rs 4.95 lakh) over the stock RS variant. Limited to just 54 units, the newly introduced motorcycle is in celebration of 50 years since the legendary Honda CB750 was launched back in 1969. Also, the bike will be built-to-order and will take around three months to complete.

For the uninitiated, the CB 1100 RS is a sportier version of the standard CB1100 EX. In comparison with the standard model, the RS variant comes with a blacked-out theme, alloy wheels, radial calipers up front mounted on fatter forks and twin gas-charged shock absorbers at the rear.

As far as the mechanical upgrades are concerned, the bike gets a Racefit Urban Growler four-into-two titanium exhausts which look a lot more compact than the stock unit. This coupled with a chopped rear fender and tail tidy kit complete the sporty appeal at the rear. That said, the exhaust is restricted to track use. The engine appears to be untouched though. For reference, the stock 1140cc air-cooled inline-four engine with oil cooler makes 89.7PS at 7500rpm and 91Nm at 5500rpm. There are no fancy electronics apart from dual-channel ABS.

Commenting about the bike, the founder of the custom house Guy Willison said, “From the moment I first saw the CB1100 RS I knew it had the potential to be a thoroughbred, single seat, point-and-squirt A and B road blaster. So we’re making a strictly limited production run of 54 CB1100 RS 5Four motorcycles, each individually numbered. The number is etched subtly into the number 5 of the nickel-plated 5Four badge, which itself is inset into the tailpiece. And the paintwork had to hark back to the period in my youth when Honda dominated World Endurance Racing with their Red, White and Blue Works racers; there are no stickers or transfers – even the retro Honda logo and Wing are lovingly hand-painted."

“We’re passionate about this motorcycle. We have just selfishly designed and built it and it stirs us when we walk up to it and we don’t want to leave it at the end of a day’s riding.” And why 5Four? Simple: “That was my despatch call number…”