Seven new KTMs in one day!? Yes, you read that right 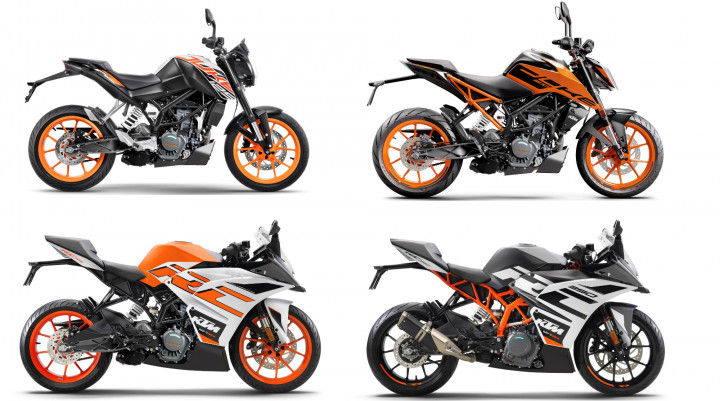 In the past few days, the internet has been abuzz with spy shots and exclusive stories on KTM’s BS6 range. Even we jumped the bandwagon by bringing you some exclusives. However, you don’t have to deal with spy shots anymore as KTM has officially launched its entire BS6-compliant range in India -- from the smallest member of the family, the 125 Duke, to the RC390! Take a look at the official price list below:

Now that you know the prices, let’s look at the changes between the BS4 and the BS6 models.

The KTM 200 Duke has received the most comprehensive update in the entire KTM lineup. KTM has given the 200 Duke a complete makeover with the same design cues as the 250 Duke. Thanks to the new styling, the tank capacity has increased from 10.2 litres to a whopping 13.5 litres! The Austrian bike maker knows that many will find it hard to differentiate between the two. So, it has introduced two new colours for the 200 Duke: Electronic Orange and Ceramic White.

Apart from the usual cosmetic changes, there are some noteworthy mechanical updates too. For instance, the BS6-compliant 199.5cc motor now makes 25PS of power and 19.3Nm of torque -- 0.83PS and 0.2Nm less than the BS4 model. The 200 Duke has gained 9kg in order to comply with the new emission norms and because of the new body panels. While the suspension setup is the same as the BS4 model, KTM has made changes to the braking hardware. So it now gets dual-channel ABS as standard!

The KTM RC200 has received the same set of changes as the 200 Duke, but unlike the naked motorcycle, it doesn’t get all-new design. Instead, there’s just new colour options.

We have already seen the new 250 Duke and to be honest, KTM has nailed it with the new paint options! The 2020 KTM 250 Duke is equipped with dual-channel ABS and SuperMoto mode as standard. Rest of the mechanicals remain the same as the older BS4 model. In fact, the 248.8cc motor has a similar power output as before (30PS and 24Nm). Check out our detailed story on the 250 Duke.

We already knew almost everything about the BS6 KTM 390 Duke, from its cosmetic changes to its final ex-showroom price. Apart from the addition of a quickshifter and new paint schemes, the 2020 KTM 390 Duke is almost identical to its predecessor. Even the BS6-compliant 373.3cc engine makes the same power and torque figures as before (43.5PS and 37Nm).

Mechanically, the BS6 KTM RC390 is the same as its streetfighter sibling, but there are some cosmetic changes in the form of new paint options. There’s also an all-new RC390 in the works, which was spotted a few months back. But don’t get your hopes high, as it is still months away from its official launch.

The 125 Duke and the RC125 will go on sale by the end of next month, whereas the other motorcycles in this list are already on sale.