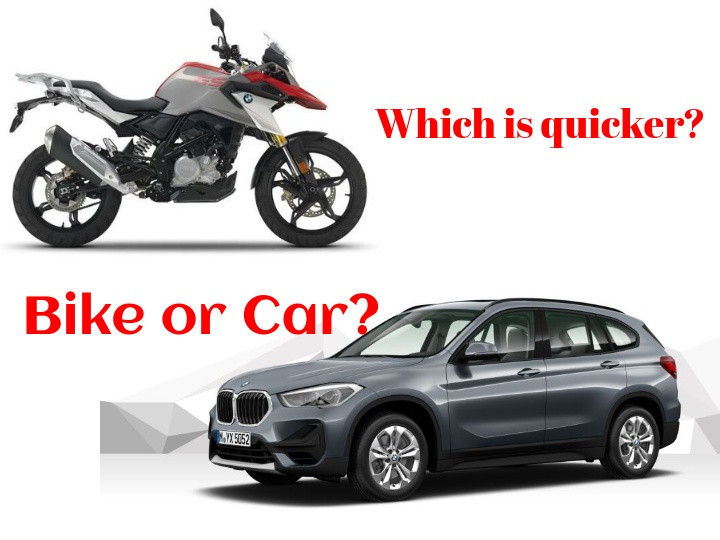 Ah, the age old debate - which is better, bikes or cars? At the end of the day, each side can provide meritable points and also valid rebuttals to the opposition’s points. But all that is usually qualitative, so let’s get quantitative and throw some numbers into the mix. Today, we’re going to be focusing on German brand BMW which operates in both the two and four-wheeled segments of the industry.

On both two wheels and four, it has offerings that are road-oriented as well as some which are meant to go off the beaten track. Today, we’re going to pit the entry-level off-road offerings from BMW up against each other. In the two-wheeled corner we have the G 310 GS, the entry point into the GS sub-brand and built in collaboration with TVS. And in the four-wheeled corner we have the BMW X1, the smallest and most affordable of all the ‘X’ SUVs, seen here in its SDrive 20d variant.

The 313cc DOHC single-cylinder motor powering the GS manages to belt out 36PS which is enough for the bike to edge out the car (but only just). The 1,995cc inline-4 diesel engine in the X1 produces 190PS and an impressive 400Nm but that’s still only enough to get it to 100kmph in 7.99sec, while the GS requires only 7.57sec for the same run.

The bike manages to retain its advantage even over a quarter mile, registering a time that’s just 0.05sec quicker than the X1. But the car’s significantly higher speed at this point tells us that it has caught up quickly and will soon pass the GS on any distance longer than a quarter mile. It’ll also go on to a higher top speed than the bike.

Since the X1 is an automatic, it’s impossible to carry out in-gear acceleration runs, but we think that substantial torque figure could work in the car’s favour and bring it out on top when it comes to roll-on acceleration.

This is where having an extra pair of wheels pays off for the X1. The better braking stability offered by the 4-wheeled layout, combined with twice the number of brake discs, is enough to overcome the significant weight disparity. The X1 grinds to a halt from 100kmph in just 37.46m, a significantly shorter distance than the 51.6m required by the G 310 GS. In fact, the GS requires nearly as much ground (33.47m) to stop from 80kmph as the X1 needs to stop from 100kmph. A clear win for the car here.

In summary, we can see that the bike’s superior power to weight ratio gives it the edge in acceleration (at least up to 100kmph), but the car’s aerodynamics will almost certainly give it a higher top speed (especially considering it packs in an 8-speed automatic gearbox), and quicker acceleration beyond about 110-120kmph. And when it comes to braking, the X1’s layout gives it the upper hand as well.