The Best Bikes And Scooters From Auto Expo 2018

From futuristic concepts to production-ready motorcycles the Auto Expo 2018 was packed to the brim with some interesting two-wheelers. Today we take a look at some of them 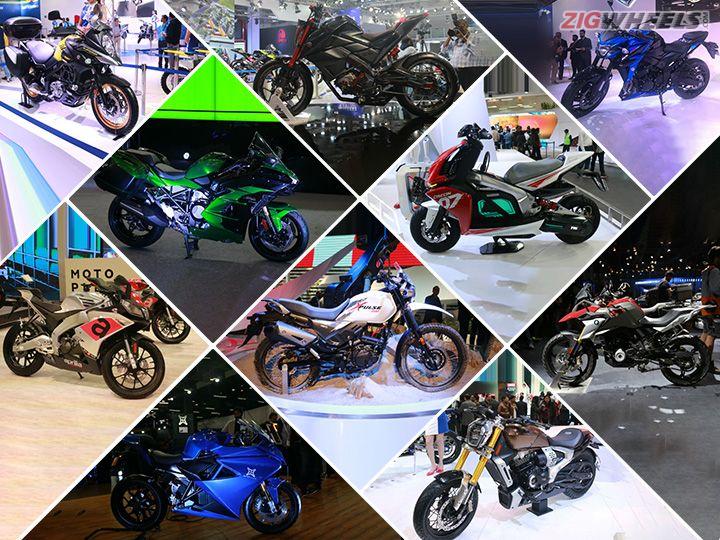 This year’s Auto Expo was packed with a number of two-wheelers and concepts making their presence felt. Here are the two-wheelers that grabbed our attention the most.

Before we make any Led Zeppelin puns on the TVS Zeppelin concept, let's ramble on and take a quick peek at some of its most interesting highlights. It comes with what TVS likes to call 'E-boost'. What it does is boost the petrol-powered 220cc, single-cylinder engine at lower speeds with the help of an electric motor. This in turn helps the motorcycle attain quicker acceleration.

The company has even filed a patent for this integrated starter generator system, comprising of a 12000W (1.6PS) electric generator and a 48V lithium-ion battery, which is charged via the motor. TVS claims that this helps in boosting both performance and fuel efficiency. However, its party piece is the HD action camera integrated into the headlamp housing. This enables the rider to record his rides. But, considering cost constraints, this feature probably won't make it into the production model, so don't ditch your GoPro yet.

Along with the TVS Zeppelin, TVS also showcased its first ever electric scooter, the TVS Creon. The first thing you'll notice is its futuristic design, with LED headlamp and indicators housed on the apron. It is also equipped with a TFT instrument screen, diamond-cut alloy wheels and an aluminium perimeter frame. Power comes from a 12kW electric motor, which propels the scooter from 0-60kmph in just 5.1 seconds.

TVS claims it has a range of 80km and it comes with fast charging option that juices up from 0 to 80 per cent in just one hour. Of course, it comes with additional features such as cloud connectivity, three riding modes, regenerative braking, GPS navigation, geo-fencing, safety/anti-theft features and a smartphone charger. The Creon is also seen sporting disc brakes on either side along with single-channel ABS unit. Concepts are always to be taken with a pinch of salt, but we certainly do hope the Creon sees the light of day in Hosur.

The Yamaha YZF-R15 V3.0 just made its Indian debut with an all-new engine and a slipper clutch at the Auto Expo 2018. However, along with it the company also showcased the naked street fighter, the Yamaha M-Slaz, in a jazzed up form showcasing their take on stunt bikes. Mechanically, it packs the same 150cc, single-cylinder, liquid-cooled engine that we have seen on the R15 V2.0, which makes 16.3PS of power and 14.3Nm of torque.

But that's not where the similarities end -- the M-Slaz also gets a Deltabox frame like the R15. The bike also features a fully digital instrument console and LED headlights. While this was just a showcase of Yamaha’s abilities towards modifications, we sincerely hope that the M-Slaz comes to India. Cause if it does, the Yamaha M-Slaz will certainly disrupt the 150cc motorcycle segment in India.

Have you dreamed of owning an Aprilia motorcycle, but lacked the funds for doing so? We have some good news for you. Along with the SR 125, Piaggio also showcased the Aprilia RS 150 and the Tuono 150 at the Auto Expo 2018. Focusing on the RS 150, it is a scaled-down replica of Aprilia's flagship, the RSV4 1100 RF. Everything from the headlamp layout to the LED taillight unit resembles its elder sibling.

Even the fairing carries a factory racing livery. Powering the baby RS is a 150cc, liquid-cooled, fuel-injected engine that makes 18PS of power at 10,000rpm and 14Nm of torque at 7500rpm. Once launched in India, it will certainly give the newly launched Yamaha R15 V3.0 some tough competition.

The G 310 GS is an adventure tourer inspired by the much elder members of the GS family. The entry level adventure tourer segment is heating up in India, with more and more people gravitating towards dual-purpose motorcycles. But currently, the only affordable option one has is the RE Himalayan, which isn’t the most reliable when it comes to quality. But with the launch of the G 310 GS, that could change very soon.

Speaking of dual-purpose motorcycles, Hero unveiled the production-spec version of the Hero Xpulse concept at Auto Expo 2018. It was showcased at the 2017 EICMA Show in Milan. Based on the Hero Impulse, the Xpulse certainly grabs your attention with its off-road-capable suspension, high-mounted mudguards and knobby tyres. It also shares its engine with the Xtreme 200R.

This 200cc, single-cylinder, fuel-injected and air-cooled engine delivers 18.4PS of power at 8000rpm and 17.1Nm of torque at 6500rpm. After its launch, the Hero Xpulse will heavily undercut both its competitors, the BMW G 310 GS and the RE Himalayan.

What grabbed our attention at Kawasaki's stall was (sadly) not the Z900RS but the supercharged tourer that is the Kawasaki Ninja H2 SX. Based on the Ninja H2, the H2 SX offers a host of different features that makes it even more of a capable tourer.

Among a plethora of electric vehicles, the one that attracted our attention the most was the Emflux Model One. Why? For starters, the company claims that it can sprint from 0 to 100kmph in a matter of 3 seconds! Along with it, the electric superbike can also achieve a claimed top speed of 200kmph. Powering all this is a 60kW motor that produces 84Nm of torque and has a claimed city range of 200km and a highway range of 150km.

The Samsung-developed battery takes just over half an hour to charge from 0 to 80 per cent. Some of its features include a 6.8-inch TFT screen that displays real-time diagnostics, GPS navigation and more. The Model One is expected to debut next year in March, with a price tag of around Rs 5 - 6 lakh (ex-showroom).

The middleweight naked motorcycle segment is set to heat up with the Suzuki GSX-S750. It is a proper streetfighter with a muscular design that complements its sharp bodywork. Powering the GSX-S750 is a 749cc, liquid-cooled, inline-four engine, mated to a six-speed gearbox.

It is also packed with features like - three-mode traction control system (which can be switched off), and a low rpm assist that monitors the engine speed and ensures the revs stay in torque range even when the throttle is closed. Suzuki will bring the GSX-S750 to our shores via the CKD route. It will then be assembled at the company's factory in Manesar. With local assembly, we are expecting the GSX-S750 to be priced around Rs 7-8 lakh (ex-showroom).

Along with the GSX-S750, Suzuki also unveiled the V-Strom 650XT at the Auto Expo 2018. The ADV enjoys immense popularity internationally and Suzuki will want to replicate that on the domestic front too. This will cement the company’s position in the middleweight adventure tourer segment, which is currently dominated by the Triumph Tiger 800 series.

Powering the motorcycle is a 645cc, liquid-cooled, V-twin engine that is mated to a six-speed gearbox. Peak power of 71PS is made at 8800rpm while 62.3Nm of torque comes in at 6500rpm. Available in two variants, Standard and XT, internationally, the company is more keen on getting the XT variant seen here to our shores via the CKD route. This will help in pricing the motorcycle competitively in its segment.