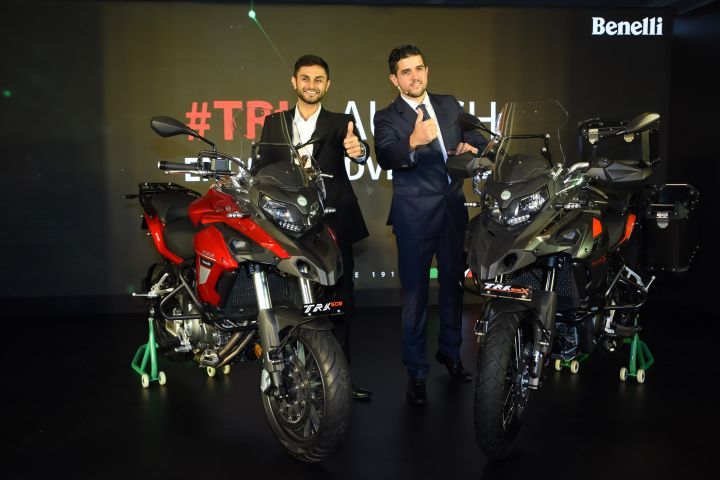 Benelli India has joined the list of manufacturers that offer mid-sized adventure tourers in the country with the launch of the TRK 502 and TRK 502X. While the two share the same engine, tuning and design, the 502X is Rs 40,000 more expensive than 502X (Rs 5 lakh, ex-showroom). So what separates the two motorcycles from each other? Let’s find out.

They look the same...

If you’re looking for visual cues to tell them apart, better look closer. Both motorcycles sport a proper ADV design i.e they look big, intimidating and commanding. In fact, although they pack a smaller engine, they look similar to the Ducati Multistrada and Triumph Tiger. Both feature a large beak-like fender at the front with twin headlamps sitting on top of them. For better wind protection, both get a large windshield flanked by knuckle guards on either side. The main visual difference here is that the 502X gets an upswept exhaust instead of the stubby unit on the standard TRK 502.

To find out the most noticeable difference between the TRK 502X and the TRK 502, one needs swing their leg over the seats. At 840mm, the saddle on the former is taller. The standard TRK 502 has a less intimidating seat height of 800mm. Additionally, for better off-road performance, the 502X gets a 30mm higher ground clearance than the standard variant (at 220mm) and hence is 30mm taller than the TRK 502. Interestingly, both motorcycles are on the heavier side with a kerb weight of 235kg. This can feel a bit intimidating for new riders, especially on the TRK 502X.

The suspension setup is slightly different too. Both sport the same setup - 50mm USD forks at the front and a monoshock unit at the rear. However, considering the TRK 502X’s bigger front wheel, the suspension setup should behave differently. Coming to the rear suspension, the stroke on the 502X is bigger by 5mm. This should theoretically result in higher wheel travel.

On paper, the braking setup looks similar on both bikes, with 320mm dual disc at the front and a 260mm disc at the rear. However, the TRK 502X gets sliding callipers, as opposed to radial callipers seen on the TRK 502. This helps it in achieving more progressive braking, which should come in handy while off-roading. In addition to this, the TRK 502X also gets a petal disc for better heat dissipation.

So which one should you go for?

Benelli has priced the TRK 502 at Rs 5 lakh and the TRK 502X at Rs 5.4 lakh (both, ex-showroom India). If touring is your priority, the TRK 502 is your best bet. However, if you want to get a little dirty, the TRK 502X is the one for you. Considering their price tags, both motorcycles don’t have any rivals in the segment. Instead, they could serve as a stepping stone for someone graduating from the Kawasaki Versys-X 300 to the Versys 650.