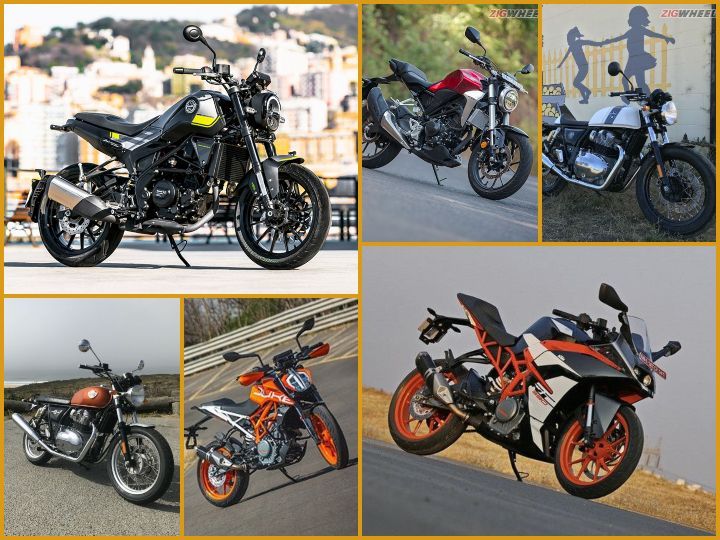 Benelli recently launched their 250cc urban scrambler, the Leoncino 250, at Rs 2.5 lakh (ex-showroom). The new motorcycle carries forward the design and premium looks of the larger Leoncino 500 but in a smaller, more compact package. Its 249cc liquid-cooled single-cylinder motor makes more power than the Yamaha FZ25 and Honda CBR250R. However, the Leoncino 250 costs significantly more than the two. (Know more about the Leoncino 250 here). At its asking price, there are larger and more powerful motorcycles you can opt for. Let’s start with the most powerful one first.

Royal Enfield Interceptor 650 (Rs 2.51 lakh):
The Interceptor 650, along with the Continental GT 650, is the largest motorcycle here both in terms of cubic capacity and the fact that it has one cylinder more than the others. Its 648cc air-cooled and parallel-twin motor makes 47.65PS and 52Nm. The bike offers good acceleration and fantastic highway cruiseability. It might not look as retro as the RE Bullet or Classic models but the Interceptor has old-school charm with none of the associated gremlins.

KTM 390 Duke (Rs 2.48 lakh):
Since its launch, the KTM 390 Duke has arguably offered the best value-for-money proposition in its segment. In its current avatar, the 390 Duke brings even more features to the table. It gets LED lighting all around and in the only motorcycle here to offer a full-colour TFT instrument console with Bluetooth connectivity. Its 373.2cc liquid-cooled motor delivers 43.5PS and 37Nm. Coupled with the fact that it weighs just 149kg (dry), the 390 Duke is quick on its feet. Along with the powerful motor, the 390 Duke gets premium underpinnings as well. It has an edgy nature and does not do well in sedate riding conditions. Consider the 390 Duke if you are looking for a sporty motorcycle on a budget.

Honda CB300R (Rs 2.42 lakh):
Honda gets the CB300R to India as a CKD import and while that does add to its price, the motorcycle impresses with its build and part quality. It gets a minimalist neo-retro bodywork which does not offer much in terms of road presence but has a premium feel. Features include all-LED lighting and a digital instrument console. Its 286cc liquid-cooled single makes 30.45PS and 27.4Nm, which is not as much as the others. However, it weighs just 147kg (kerb), the lightest in this list, so performance is sprightly. The CB300R is as engaging as the KTM 390 Duke in corners and its torquey mill is comfortable pottering around in town as well.

KTM RC 390 (Rs 2.44 lakh):
If you are looking for a track bike, the KTM RC 390 should be right up your alley. Its has a committed track-focussed riding position thanks to its low-set clip-on bars. While the RC 390 does not get the 390 Duke’s LED headlamp, it has a twin projector headlamp setup that offers fantastic lighting. While the RC 390 is a serious performer and a hoot to ride on track, its riding position is a pain to ride in the city and on extended highway runs.

Also read: Major Design Overhaul In Store For The Next RC 390