Does the base spec Magnite look too stripped down when compared to other variants? Let’s find out 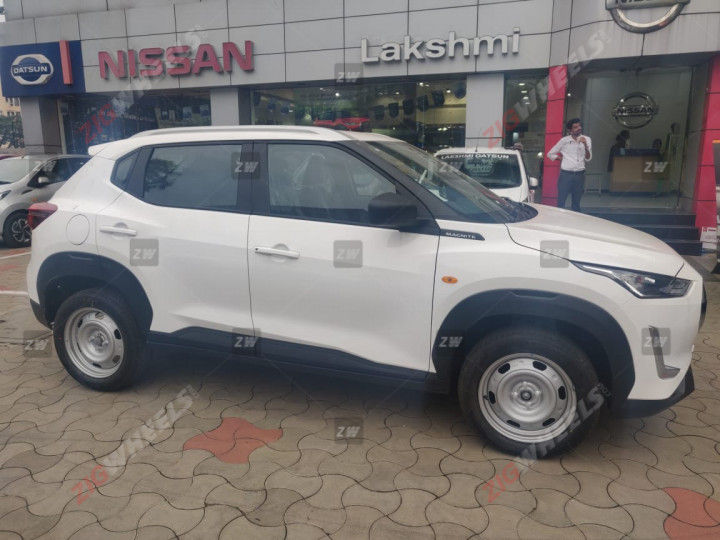 Nissan surprised us when it announced prices for the Magnite SUV, which starts from Rs 4.99 lakh and goes up to Rs 9.59 lakh. The Magnite comes in five variants: XE, XL, XV, XV Premium and XV Premium (O). We got our hands on the images of the base-spec XE variant. Take a good hard look:

The large grille with a chrome surround has been retained, however, the XE comes with halogen headlamps instead of LED units. Even the ‘L’-shaped LED DRLs have been traded in for a chrome strip on this variant. That said, it doesn’t look stripped down when viewed head-on.

Where the Magnite XE looks basic is in its profile as it comes with steel wheels without a plastic wheel cap. However, these are 16-inch units and they fill up the arches nicely. The turn indicators sit on the fenders and the body-coloured wing mirrors are finished in black. Even the chrome inserts on the body-coloured door handles have been deleted.

At the rear, the Magnite XE comes with a blacked-out rear bumper instead of the contrasting silver unit found in the XV Premium. There is a rear spoiler with an integrated brake light too. Thumbs up to Nissan for offering rear wash and wiper as well as a demister as standard.

The Magnite XE’s interior is finished in dual-tone black-beige, which looks similar to the Triber. Even the 3.5-inch digital instrument console is a direct lift from the Renault. The Magnite also comes loaded with essentials such as a power steering, manual air-con, power windows, and internally adjustable ORVMs. Nope, this variant doesn’t feature an infotainment system, however, it gets dual airbags, ABS with EBD, and rear parking sensors.

It can also be had with two shades: white and silver.

The Magnite XE will appeal to those who want a no-nonsense SUV with just the essentials. The icing on the cake is its Rs 4.99 lakh (ex-showroom) price tag, which even undercuts premium hatchbacks such as the Tata Altroz and Maruti Suzuki Baleno. It’s also a full Rs 1.72 lakh more affordable than the base-spec variant of the Sonet.