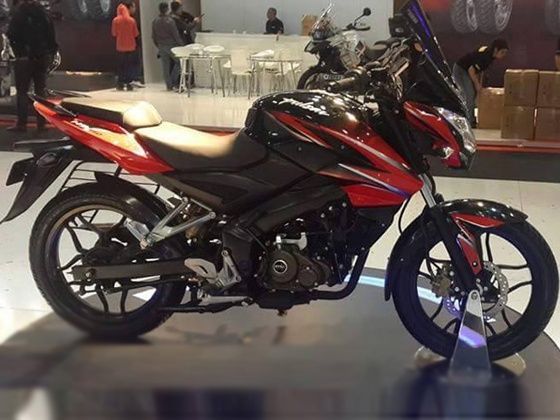 The Bajaj Pulsar 150 has been a great success story for the Chakan based manufacturer. But with new generation of 150cc motorcycles in the form of the Suzuki Gixxer, Yamaha FZ FI and Honda Unicorn 160 pushing the envelope in terms of performance and engineering the Pulsar 150 has started to show its age. Bajaj Auto has taken notice of this situation, and as a result the next generation Bajaj Pulsar 150 has been spotted testing for more than a year. It seems that Bajaj is all-set for the final assault and will launch the new Bajaj Pulsar 150NS as the bike was showcased at the recently concluded Trade Fair in Istanbul, Turkey.

From the pictures it is clear that the new Bajaj Pulsar 150NS will carry forward the same design language as seen on the Pulsar 200NS. The brute streetbike styling should enable it to standout among its rivals and also appeal to the youngsters. But what sets the Bajaj Pulsar 150NS showcased at Turkey apart from the test mules and the Pulsar 200NS, is the presence of a large windscreen. The windscreen will be beneficial in shielding the rider from wind blast at high speeds but whether it will be offered in the India-spec Pulsar 150NS remains to be seen. Switch gear and the part-analogue-part-digital instrument console have been carried forward from its 200cc sibling. The Bajaj Pulsar 150NS has a slimmer tail section; missing tyre hugger and skinny rear tyre are the visual differences between the two Pulsar offerings.

It was long speculated that the next generation Pulsar will be powered by a 180cc engine but the 150NS moniker has put to rest those claims. We speculate it to be powered by a 150-155cc motor with DTS-i and triple spark technology churning out around 16PS of maximum power. The powerplant will be mated to a five-speed gearbox.  The Bajaj Pulsar 150NS employs telescopic forks at front and a monoshock setup at the back. This makes the new motorcycle the second Pulsar offering after the 200NS to adopt a monoshock suspension.

Braking is done by a disc brake at front and drum brake at rear. We feel Bajaj could offer rear disc brakes as an optional extra like in the case of the Honda CB Trigger. Bajaj is renowned for their cut-throat pricing so we can expect the new Pulsar 150NS to carry a sticker price of around Rs 73,000. The Bajaj Pulsar 150NS is said to be launched by mid-2015 post the Pulsar 200SS which will make its Indian debut later this month.