Just days after the Pulsar 200 AS was seen in Indonesia, an undisguised Bajaj Pulsar 150 NS has been seen on the streets of Pune. Once launched, the Pulsar 150NS will take on the likes of Yamaha FZ FI V2.0, Suzuki Gixxer and the new Honda CB Unicorn 160. 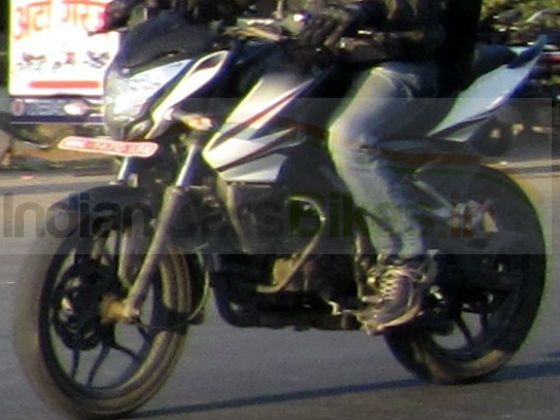 The 150-160cc segment could soon see competition heating up with the latest from Bajaj – the 150NS. ICB has showcased spyshots of an undisguised 150NS on the streets of Pune.

The new 150NS is expected to replace the existing Pulsar 150 DTSi, just like the 200NS replaced the Pulsar 200. Visually, the 150NS looks almost similar to the 200NS, except for a skinnier rear tyre.

The bike in the spy shots doesn’t sport a 150NS badging, but the skinny rear tyre indicates that this is the smaller 150NS.  The powerplant is expected to be a 150cc unit with triple spark ignition, expected to make about 15-16PS of power and mated to a five-speed transmission.