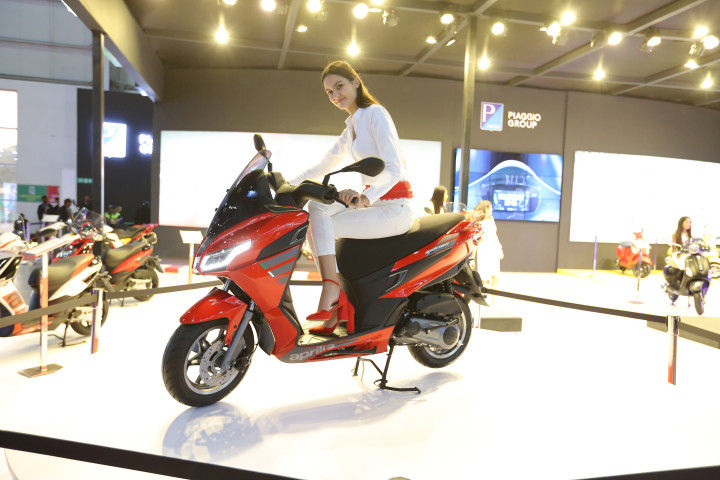 It’s safe to say, Auto Expo 2020 has been pretty dry up until now, especially for two-wheeler enthusiasts. The only saving grace being Aprilia! Who would have thought, right? Nonetheless, the Italian two-wheeler manufacturer has taken the wraps off its first India-specific SXR160 sporty maxi scooter based on the SR 160. It comes in four colours: blue, red, black and white. The scooter will be launched by the third quarter of 2020 while bookings will begin from August 2020.

The SXR160 may borrow the same engine and underpinnings, but that’s all the similarities there are. Design, on the other hand, is a whole different story. The scooter features a sharp design language with a full-LED headlight running LED DRLs, LED tail light, a tall windscreen, full-digital instrument console, a plush slightly stepped-up seat, and a stretched-out floorboard for a relaxed riding posture. You also have extra storage in the front apron for personal belongings. And just in case your phone runs out of juice, there’s a mobile charging port to back you up.

Though the brand hasn't revealed any details about the scooter's power output, we believe it'll be powered by the same 160cc single-cylinder engine seen on the SR 160. So we can expect around 11PS peak power and a maximum torque output of 11.6Nm from the engine. We'd also like to point out that the motor will comply with BS6-emission norms.

Its hardware setup comprises a telescopic fork, monoshock, and disc brake at both ends coupled with single-channel ABS. Its 12-inch 5-spoke machined alloys come wrapped in 120/70-section at either end.

All said and done, we believe, Aprilia’s entry into the maxi scooter segment hints at its expansion plans in the Indian market. Having a single model won’t help the brand reel in volumes and the introduction of this sweet-looking SXR160 might just do the trick for them. The scooter’s sheer road presence, feature list, and power should be enough to draw in enthusiasts. But I guess we’ll just have to wait and see for ourselves.

The SXR160 doesn’t have a rival in the Indian scooter space just yet, with the closest competition being the Suzuki Burgman Street 125 and the Kymco X-Town 300i, which disappeared from the face of the Earth after its supposed India launch back in June last year.