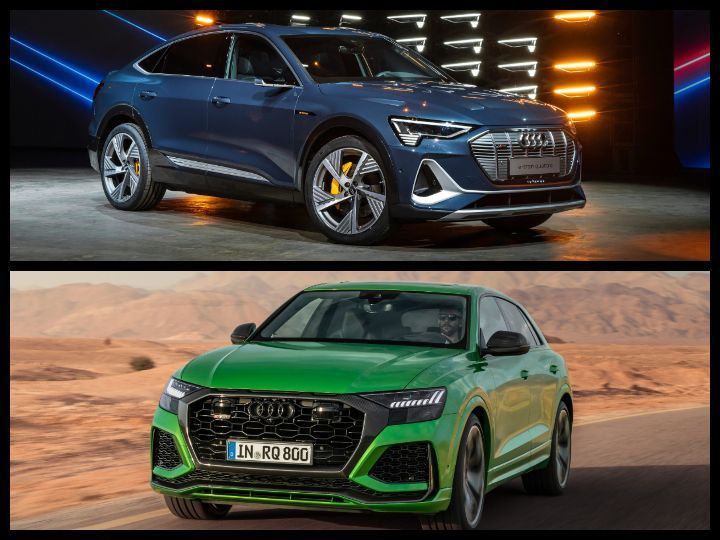 The limelight at Audi’s stall at Los Angeles was two new SUVs: the all-electric e-tron Sportback and the RS Q8 super SUV. The e-tron Sportback is swoopier ‘SUV coupe’ version of Audi’s all-electric e tron SUV. On the other hand, the RS Q8 is the performance oriented version of the standard Q8, capable of giving the Urus a serious nightmare. Let’s read about both the models in detail:

The showstopper is the new e-tron Sportback, the SUV coupe version of the e-tron SUV. Its design highlight is the roofline that slopes down cleanly from the A-pillar to the boot. It also comes with the connected tail lamps, a design element seen in the e-tron and more expensive Audis. The fascia of the Sportback is identical to the e-tron, with a large Audi-esque grille flanked by matrix HD LED headlamps.

The Sportback shares its dashboard with the standard e-tron. It also gets those sleek ORVM cameras which help it to be more aerodynamic. The e tron Sportback comes with two electric motors powering all four wheels. It is available in two variants: 50 quattro and 55 quattro. The 50 quattro version develops 312PS and 540Nm and draws power from a 71kWH battery pack. It has a WLTP claimed range of 347km on a single charge.

On the other hand, the 55 quattro puts out 360PS and 561Nm and takes its juice from a bigger 95kWH battery pack. This version has a WLTP claimed range of 446km on a single charge. The 55 Quattro variant also comes with a boost mode that uprates the power to 408PS briefly. In full oomph, the 55 quattro variant does the 0-100kmph sprint in 5.6 seconds!

Audi has taken the wraps off the RS Q8, its final RS model for the year at the 2019 LA Auto Show. The super SUV comes with a 4.0-litre twin-turbo V8 engine that develops 600PS and 800Nm. The powertrain comes mated with a 48V mild hybrid system for additional torque boost. Power is distributed to the wheels by Audi’s Quattro all-wheel drive tech via an 8-speed automatic transmission. These numbers help the RS Q8 achieve 0-100kmph in 3.8 seconds, 0-200kmph in 13.7 seconds and a top speed of 250kmph. The RS Q8 is also the fastest SUV around the Nurburgring, completing the Green Hell in 7 minutes 42.2 seconds, beating the Mercedes-AMG GLC 63 S by seven seconds!

Closer to home, we’ll be getting the standard e-tron electric vehicle and the Q8 SUV. Audi has already showcased the e-tron in India and is expected to launch it by mid 2020. On the other hand, the Q8 will be launched on January 15, 2020. Both SUVs are expected to have a price tag of Rs 1.40 crore (ex-showroom).