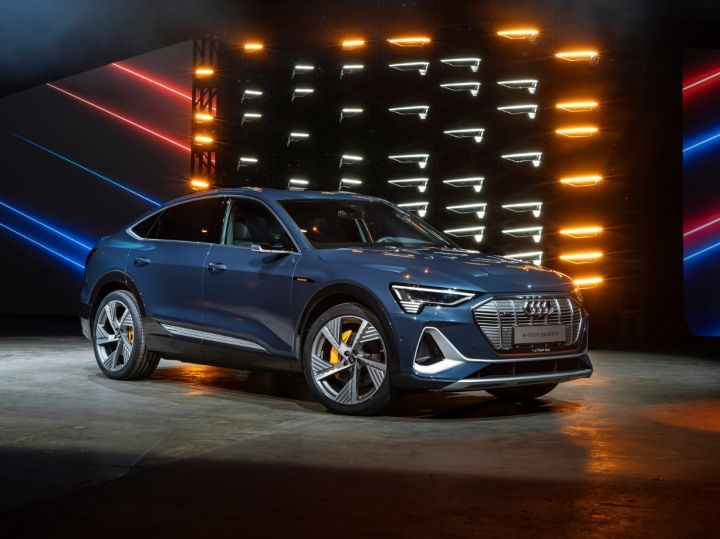 Audi has unveiled the e-tron Sportback electric SUV at the ongoing 2019 Los Angeles Auto Show. It is the SUV coupe version of the standard e-tron electric vehicle (EV) and is more aerodynamic than the latter. The e-tron Sportback is available in two variants - 50 quattro and 55 quattro. The latter shares its powertrain and battery pack with the e-tron 55 quattro.

There’s no denying it. The highlight of the e-tron Sportback has to be its roofline, which starts sloping down from the A-pillar and flows cleanly into the boot. The muscular haunches and giant wheel arches give it added appeal. Audi says it will offer the Sportback with wheel sizes ranging from 19-inches to 22-inches to suit your taste. At the rear, the SUV comes with connected LED tail lamps and a sporty rear bumper with a diffuser. The Sportback’s front end remains identical to the standard e-tron with the massive Audi grille flanked by ‘Matrix HD’ LED headlamps.

The swoopy design of the e-tron also makes it more aerodynamic than the standard model. The e-tron Sportback has a very low coefficient of drag value of 0.25cd, 0.02 cd lesser than the standard e-tron. It also gets the standard SUV’s sleek ORVM cameras that not only look cool but improve air flow around the sides. Then there’s the adaptive air suspension that allows you to lift, lower, stiffen or soften the ride, while the all-wheel-steering ensures quicker steering response and improved maneuverability.

The e-tron Sportback is as long and wide as the standard e-tron. Both models have an identical wheelbase as well. However, the sloping roofline on the Sportback has resulted in a 13mm shorter height.

The e-tron Sportback can be had in two configurations: 50 quattro and 55 quattro. Both models come with twin electric motors that sit on each axle and power all four wheels. The 50 quattro’s powertrain develops 312PS and 540Nm while the 55 quattro variant puts out 360PS and 561Nm. The latter also comes with a boost mode which increases power output to 408PS briefly. Here’s a detailed table about the complete specifications of the e-tron Sportback 50 quattro and 55 quattro.