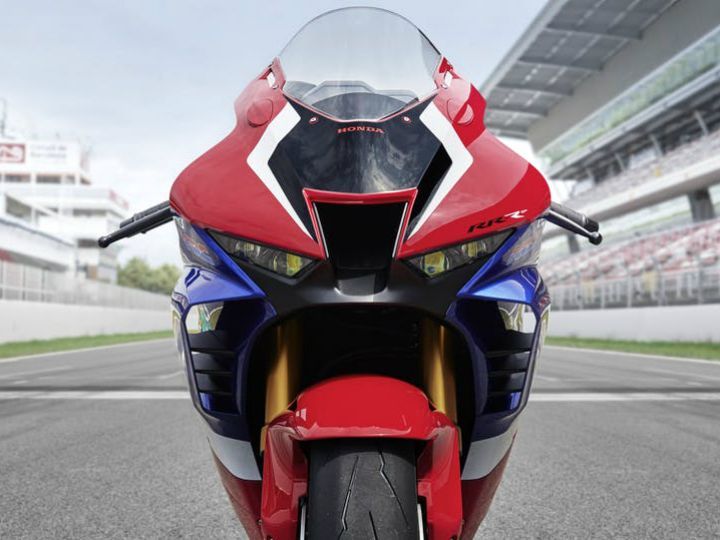 Honda has finally entered the 200PS club and how! The all-new 2020 CBR1000RR-R Fireblade is a massive upgrade over Honda’s current-gen litre-class superbike. For one, it gets a focussed styling derived straight from HRC’s MotoGP manual. The extra R in its name screams pure race focus and so do the massive air-intake between the sharp LED headlamps as well as the stacked aero winglets on the sides. Yes, the 2020 Fireblade is all about aerodynamics! Even the fuel tank sits 45mm lower, enabling the rider to tuck himself completely behind the windscreen. Overall, the new Fireblade looks even more compact than the outgoing model but is way more purposeful.

Fun fact: the new CBR gets keyless ignition. This means that there’s no physical ignition barrel obstructing airflow from the central air intake to the airbox.

The new 999.9cc inline-four powerplant has the same bore and stroke as the RC213V-S, lending it a more oversquare configuration than before. It uses exotic materials to keep weight and centrifugal forces down and allows the motor to spin up faster. The resultant output is a massive 217.5PS at 14,500rpm and 113Nm of torque at 12,500rpm. Given that the bike now weighs just 201kg (kerb), expect some pretty explosive performance.

This lightweight has been achieved with the use of an aluminium frame and the monoshock being mounted directly onto the back of the motor, deleting the need for a rear cross member. More than being light, Honda’s engineers have concentrated on giving the rider more chassis feel. The frame is 11 per cent less rigid for more flex and feel while the new and longer swingarm, while being more stable, is said to offer more feel while leaned over. Even the rear tyre is a larger 200-section radial unit to enhance the contact patch and offer better traction. While the regular CBR1000RR-R Fireblade gets Showa Big Piston forks and Big Piston monoshock, the hotter SP version comes with Ohlins semi-active suspension setup. Both bikes get larger twin 330mm discs at the front. But while the regular CBR gets Nissin monoblocs, the SP variant gets Brembo Stylema calipers.

Electronics, too, have received a massive boost with the previous five-axis IMU being replaced with a six-axis unit. So you get a nine-stage traction control system and cornering ABS. It also gets launch control as standard. All electronics can be accessed via a 5-inch colour TFT screen which gets a new graphic interface.