Which mid-capacity motorcycle came out on top in our fuel efficiency tests? 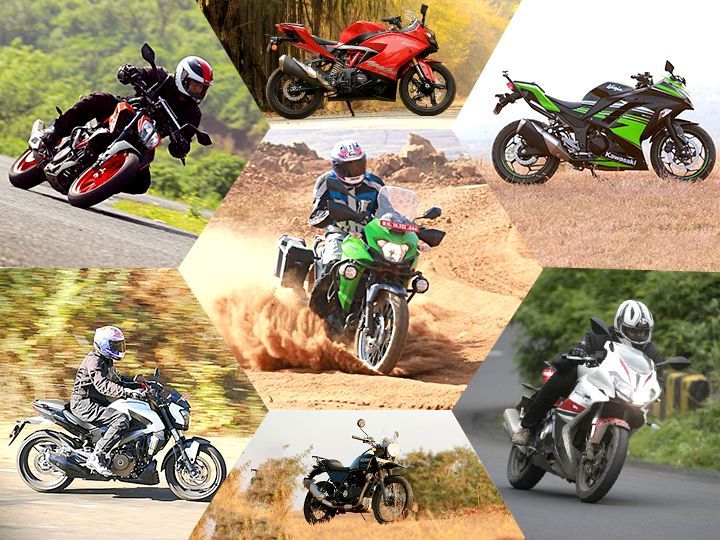 Mid-capacity motorcycles, especially in the 300-400cc segment are primarily built for performance. However, even for these bikes, the age-old question remains inevitable - Kitna deti hai? To answer the burning question, here's what we found in our fuel efficiency tests in the city and out on the highway.

Packed with explosive performance, the KTM 390 Duke is one of the most value for money bikes in its segment. Understandably, this comes at the cost of its efficiency which stands at 25.7kmpl in the city and 28.5kmpl on the highway. The naked motorcycle makes 43.5PS of power and 37Nm of torque, working in unison with a 6-speed transmission with slipper clutch. The bike costs Rs 2.40 lakh (ex-showroom Delhi).

The mid-capacity adventure touring segment in India has shown a lot of promise after it was kick-started by the Himalayan. Kawasaki also jumped onto the bandwagon, with a rather expensive offering, the Versys-X 300. This baby Versys is slightly more efficient in the city, at 29.86kmpl, than on the highway where it returned 27.57kmpl with the 296cc Ninja 300-based engine. Paired with a 6-speed gearbox, this motorcycle churns out 40PS at 11,500rpm, and 25.7Nm at 10,000rpm. The Versys-X 300 will set you back by a whopping Rs 4.69 lakh (ex-showroom).

The Benelli 302R is the Italian marque’s first faired motorcycle in the country. The faired design has helped in the aerodynamics of the motorcycle, which is apparent in its highway efficiency figure of 31.52kmpl. On the other hand, the added weight of the fairing has negatively impacted its city efficiency, returning only 28.11kmpl here. The motorcycle employs a 300cc in-line two-cylinder DOHC liquid-cooled engine which makes 38.7PS at 11,500rpm. A peak torque of 26.5Nm arrives at 10,000rpm, and the bike gets a 6-speed gearbox. The motorcycle is priced at Rs 3.62 lakh (ex-showroom Delhi).

Bajaj’s flagship offering, the Dominar 400 has a unique positioning in the market, thanks to its power-cruiser design. However, it makes for a potent touring machine, with an equally commendable highway efficiency of 34kmpl. However, its city efficiency is a tad below par, at 26.5kmpl. The motorcycle draws power from the KTM-derived 373.3cc single-cylinder DTS-i liquid-cooled mill with a 6-speed slipper clutch-enabled transmission. A peak power of 35PS and a peak torque of 35Nm comes in at 8000rpm and 6500rpm respectively. The Dominar carries a price tag of Rs 1,60,272 for the ABS variant (ex-showroom Delhi).

The Kawasaki Ninja 300 is the most affordable motorcycle in the Ninja family. It has been in the market for quite a long time now, and is still preferred for its brilliant build quality. The efficiency of the motorcycle was almost the same in both the city and on the highway. Its 296cc parallel-twin liquid-cooled, fuel-injected engine returned 32.1kmpl in the city and 31.1kmpl on the highway. This free-revving engine with a 6-speed transmission is good for 39PS at 11,000rpm, and 27Nm at 10,000rpm. The Ninja 300 is priced at Rs 3.6 lakh (ex-showroom).

TVS’ maiden attempt at the burgeoning mid-capacity segment is the brilliant Apache RR 310, thanks to its alluring design and modern underpinnings. The bike is commendably fuel efficient on the highway, returning 35.9kmpl. A part of the credit goes to the aerodynamic fairing, whose drag coefficient is 0.26. TVS claims this figure is the lowest in the 300cc segment. Even in the city, the motorcycle returned 31kmpl, which is quite good for a performance machine. A single-cylinder 312.2cc reverse-inclined engine with a 6-speed transmission is nestled inside the split chassis trellis frame. It develops 34PS at 9700rpm, and 27.3Nm at 7700rpm. The motorcycle is priced at Rs 2.23 lakh (ex-showroom Delhi).

Royal Enfield really took the leap of faith into unknown territories with the radically different Himalayan that’s built to explore errm, unknown territories. In city, the Himalayan returned 36.26kmpl, while on the highway, the efficiency stood at 37.8kmpl. The Himalayan uses an all-new 411cc single-cylinder SOHC mill with oil cooler and fuel injection. Working in conjunction with a 5-speed transmission, it produces 24.8PS at 6500rpm, and 32Nm at 4250rpm. Surprisingly, this Royal Enfield is the most frugal motorcycle of the lot. It is priced at Rs 1.72 lakh (ex-showroom Delhi).